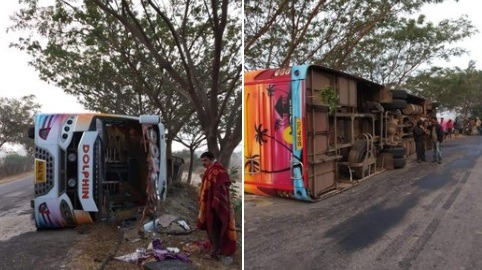 Boudh: At least three persons were injured after a passenger bus, they were travelling in, overturned at Masinapada near Manmunda in Boudh district.

According to sources, the accident occurred early on Friday morning while the Bus, named Dolphin, carrying nearly 35 passengers was en route to Raipur from Cuttack when the driver lost control over the wheels.

Following this, the vehicle turned turtle.

While the passengers had a close shave from death, three of them sustained injuries. The injured were admitted to a nearby hospital.