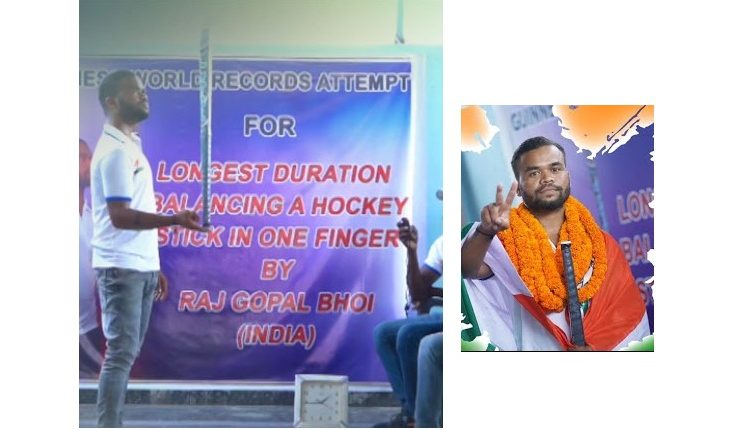 Bolangir: A youth from Odisha’s Bolangir district brought laurels to the state after he successfully attempted a Guinness World Record for ‘Longest Duration Balancing A Hockey Stick In One Finger’.

Raj Gopal Bhoi of Jamutjhula village in Turekela block set a new world recording by holding a hockey stick on his finger for 3 hours and 35 minutes breaking the previous record of 2 hours, 22 minutes and 22 seconds.

The Guinness World Record attempt was held at Haribhawan in Kantabanji. In this programme, Baishnab Kabat and Aju Jani were the timekeepers, while Ghana Satnami and Dola Netra Majhi were the expert witnesses.

The programme was organised by Guinness World Records holder ‘Punchman of India’ Satyapira Padhan, who is also Bhoi’s mentor.

The necessary details of Bhoi’s successful attempt will be sent to the Guinness World Records authorities who will evaluate it and then award the certificate.