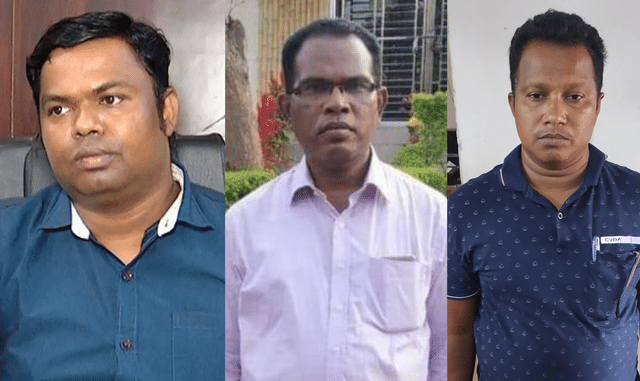 Bolangir: The State Government on Wednesday suspended Bolangir Tehsildar and Additional Tehsildar for their alleged involvement in selling a piece of land belonging to a dead daily wager by forging documents.

On the basis of a probe report submitted by Additional Collector Anantasingh Laguri and Sub-Collector Lambodhar Dharua, Bolangir District Collector sent the report to the state government and subsequently both Tehsildar Maghaban Bagh and Additional Tehsildar Harekrushna Rout were placed under suspension. Besides, the tehsil’s record keeper, Makardhwaj Kalsai, was arrested and forwarded to the court.

Notably, one Abdul Sandha of Dhumamara area had lodged a complaint with Sadar Police Station on 16th June alleging that a piece of land belonging to Harsha Sandha was sold by forging document. Based on the complaint, police registered a case (249/2022) and launched a probe.

The police had asked the tehsil and registry office for the necessary documents to continue to investigation. However, there was no reponse from either of the offices despite a reminder.

Following this, the police Tuesday evening reached the tehsil and registry office in Bolangir; confiscated the documents and also interrogated several the staff.

It is learned that Harsh Sandha, a resident of Dhumamara village, died in 2005. But, records show that he has sold a piece of land on March 3, 2021. Bolangir tehsildar Maghaban Bagh and the then registrar are under suspicion in the alleged land grabbing case.

Breaking
NCPCR Notice To NGOs Over Use Of Children In Fund Raising Malnutrition And Stunting In Odisha Can Be Contained: Chief Secy Man Gets 20 Years In Jail For Raping Minor In Mayurbhanj NCMC reviews preparedness for possible cyclonic storm over Bay of Bengal Divyang minor girl gang raped in Keonjhar, 2 including minor held Warmer Night Ahead In Odisha Due To Cyclone Over Bay Of Bengal Melinda French Gates Calls On President Droupadi Murmu Seven Fraudsters Held For Mortgaging Fake Gold In Sonepur Bank After Shraddha's Murder, Aftab Watched Johnny Depp-Amber Heard Case Trial Live For Over 100 Hrs If I Open Up, State Scenario Will Change: Archana Nag
Sign in
Sign in