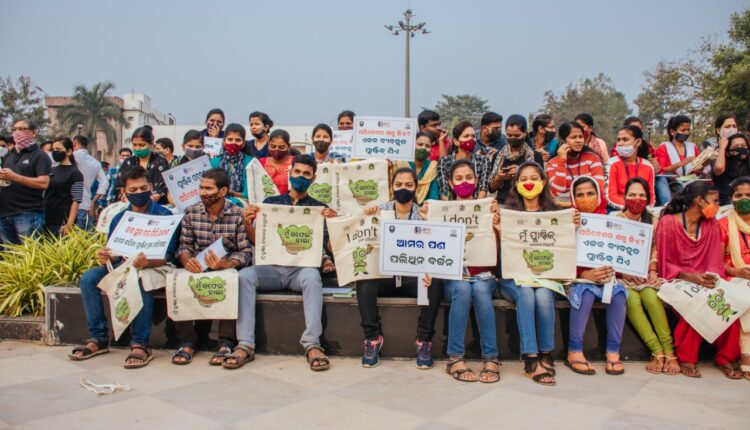 Bhubaneswar: The Bhubaneswar Municipal Corporation (BMC) and Alumni Association of Utkal University today launched an awareness campaign and mass cleaning activity against single-use plastic to make the university campus clean, green and plastic-free, on the occasion of Saheed Diwas – the death anniversary of Mahatma Gandhi.

The campaign was flagged off by Mr. B. K. Patnaik, former Chief Secretary, Government of Odisha and the President of Utkal University Alumni Association in presence of Mr. Suvendu Sahoo, Deputy Commissioner (Sanitation), BMC, along with several dignitaries at Ahimsa Sthal in the varsity campus today morning with a mass pledge to keep the university campus clean and free of plastic waste.

“This campaign would be an ongoing programme in the campus with an object of freeing it of single-use plastic involving all stakeholders such as students, faculty members, shopkeepers, staff and residents of the university spearheaded by the alumni association in association with the university authorities and BMC,” said Mr. Patnaik.

The BMC, under its ‘Mu Safaiwala’ campaign, has conducted mass cleaning by engaging its Safaikarmis and mechanical sweepers cleaned up the entire campus.

On the occasion, the Civic Body has donated 10 large dustbins, cloth bags to the university authority which will be put up at different places on the campus of the varsity.

The Civic Body has distributed leaflets, pamphlets to make students aware of single-use plastic such as water bottles, bags, cup, plates, jugs, plastic straws, and a certain type of sachets or pencils boxes and asked them to abolish the plastic from their routine life on the campus. Students were also given jute bags to use in their daily life instead of plastic bags.

Assuring all possible support and assistance from BMC to the university authorities to make the campus clean and plastic-free, Mr. Sahoo said: “Utkal University is the oldest university of Odisha and has a great reputation in shaping students’ career and future. This university has produced many famous personalities and successful people from different fields such as ministers, bureaucrats, scientists, journalists, sports stars and film stars and will continue producing many more in the future.”

He asked students and staff to join hands to end plastic pollution. “Students should refrain from the use of plastic on their campuses, canteens, hostels and shopping complexes in the institution’s premises and replace it with environment-friendly substitutes. They must encourage their friends to adopt habits and practices towards a cleaner and plastic-free campus.”