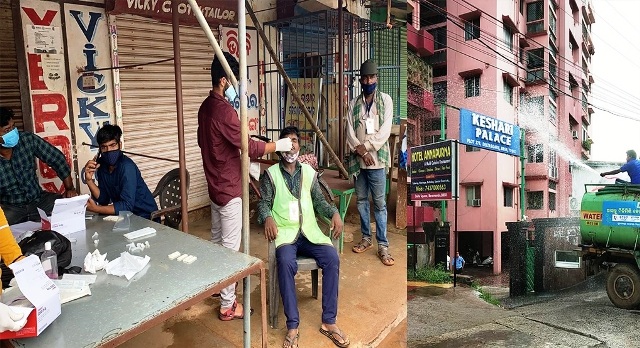 Bhubaneswar: Mass testing for COVID-19 is encouraged in many places of the city including slum habitations. Though it is Shutdown and Sunday but today’s testing coverage crosses 2000 numbers. City authority has engaged its testing wings in containment zones, public places, slum areas, vaccination points, colonies and market complexes for testing of citizens mobilised to these places.

“In order to check the spread of disease we are encouraging community members for such voluntary testing and good cooperation of citizens is extended”, said BMC Commissioner Sanjay Kumar Singh. This will help support in reducing burden of pandemic in the city and to take appropriate actions for positive cases, he added.

Along with testing due importance has been given for sanitization in different Micro Containment Areas in Three Administrative Zones. BMC has engaged nine Sanitizing Vehicles ( three in each administrative zone) to sanitize the common areas of the city through spraying of 1% solution of Sodium Hypochlorite. Today these vehicles have been intensively engaged to sanitize the three Micro Containment Areas declared yesterday.