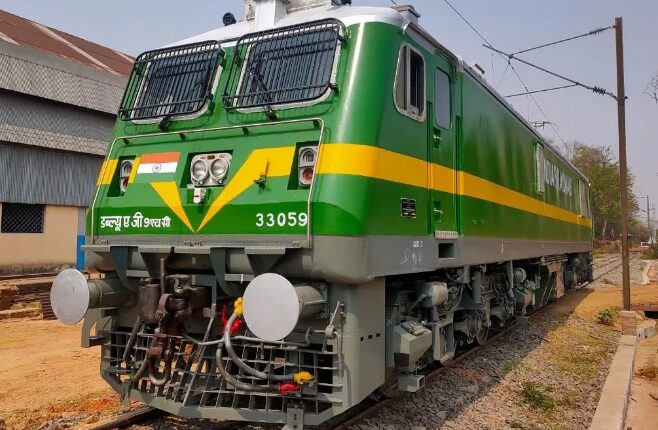 New Delhi: Banaras Locomotive Works created history by setting a new record by manufacturing the highest number of locomotives till date during the financial year 2021-22.

Along with this, BLW received 60.68 crores from exported locos in the financial year 2021-22 and a total of 704 crores since 2011 and 1837 crores from non-railway customers since 2011 till date. In the year 2021-22, BLW generated revenue of 6.09 crores from exported locomotive parts as against 1.08 crores in the previous year 2020-21, which is an increase of 464 percent over the previous year. Similarly, the revenue received from non-railway customers from the supply of locomotive parts was 16.4 crores as compared to 8.29 crores in the previous year 2020-21, which was 98.6 percent higher in comparison.

In the spirit of Atmanirbhar Bharat, Cape Gauge Diesel Locomotives Designed in India,

• Made in India and

Were exported to for Mozambique.

The crank-case assembly, which is most important item of the engine, is made in-house at BLW. These locomotives are currently successfully being operated as multiple units to haul coal from Coal Mines.

As a result, a five-member high-level delegation of National Railways of Zimbabwe along with the officials of M/s RITES are visiting India.

Anjali Goyal General Manager BLW greeted Advocate Martin Tafara Dinha Board Chairman NRZ, Mr. Elesh Kumar Patel Board Member, Ms. Respina Zinyanduko General Manager, Mr. Lovemore Katonha Traction and Quality and Mr. Tsietsi Ndlovu Regional Engineer during their meeting with RITES and assured them of full support and promptness in fulfilling their export orders. She assured the Team from Zimbabwe that BLW was very keen on participating in the economic growth and modernization of the National Railways of Zimbabwe. The team from National Railways of Zimbabwe visited Banaras Locomotive Works on 29.03.2022 to see the manufacturing facilities available at BLW.

On this occasion, a meeting of delegates was held with a team of higher officials from BLW. During the meeting, capabilities of BLW were showcased and details of loco exported were apprised to delegation from Zimbabwe.