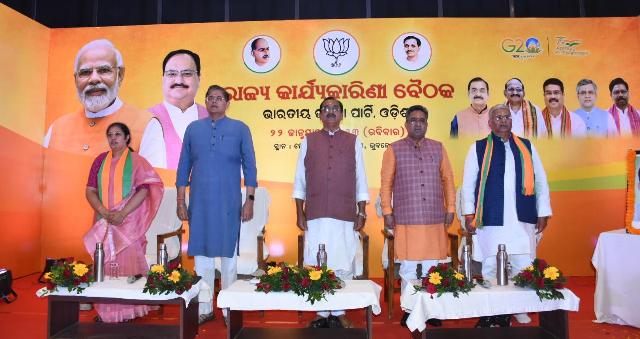 Bhubaneswar: With an aim to form government in Odisha and bag more Lok Sabha seats, the State BJP today passed 11 draft proposals at the executive body meeting held at the party headquarters here.

Based on PM Modi’s mantra at national executive, the State unit has prepared the roadmap for the 2024 general and assembly elections.

Opposition chief whip Mohan Majhi said that party has passed 11 draft proposals today. In the proposals, the party has condemned the deteriorating law and order situation in the State.

“People of Odisha are leaving in a state of fear due to law and order situation. The government has utterly failed to ensure safety and security to the lives and properties. The State witnesses nine rape cases and eight murder incidents on a regular basis. It is matter of sorrow that Ministers and MLAs are involved in such crimes,” Majhi said.

The party said the Centre has already sanctioned more than 28 lakh pucca houses to poor under PM Aawas Yojana. It is concerning that beneficiaries are being selected in the State on the basis party. Resentment is brewing among people after the list of beneficiaries were announced on January 16. Real beneficiaries are deprived of the government scheme. The issue has been included in the draft proposals and party has decided to take to the streets for the interest of the poor people.

The party has also decided to launch ‘Mandi Chala Abhijan’ over massive irregularities in paddy procurement centres across the State.

On the other hand, unemployment situation is grim in the State despite organisation of two Make In Odisha conclave to attract investments. Only one per cent investment has done in the State.

Another issue which has featured in the draft proposal is prentention to the people in the name of employment. The government has registered 20 lakh people and promised to provide them job in the State. But, people migrated to other States in search of job after government cheated them, party general secretary Golak Mohapatra said.

The BJP decided to strengthen its base at grassroots level with spreading awareness among people regarding welfare activities of the Centre.

Mohapatra said that BJP will educate rural people regarding the truth behind the interest-free loan to SHGs, free rice and Awas Yojana.

The saffron party alleged that BJD is hijacking the Central schemes and blow its own drum to make a cheap vote bank.

ASI Gopal Das fired at Naba Das with an intent to Kill:…