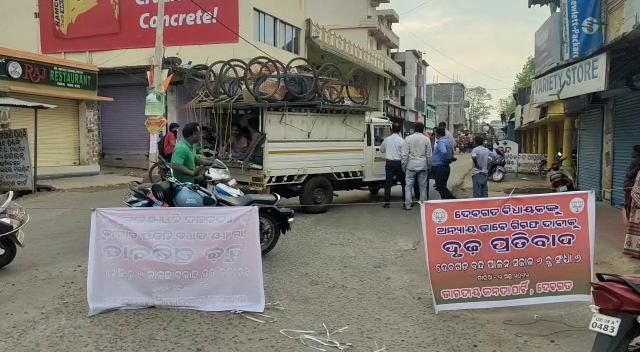 Deogarh: The Bharatiya Janata Party (BJP) began a 12-hour bandh in Deogarh on Monday, protesting against the arrest of the party’s MLA Subash Chandra Panigrahi and demanding the arrest of Tileibani BDO.

BJP leaders and workers were seen picketing at the strategic locations in the town while offices, markets, and shops downed their shutters. Similarly, vehicular movement also came to a halt due to the protest.

Reportedly, Panigrahi’s two other associates have also been arrested in this connection.

Earlier on Saturday, BDO Krushnachandra Dalapati was allegedly thrashed by Panigrahi and his associates.

Notably, Panigrahi had asked Dalapati to come and meet him over an issue. However, as Dalapati was away at Chhepalipali village for an inspection, he informed that he will not be able to attend the meeting.

Thereafter, Panigrahi allegedly visited Chhepalipali village along with few others and thrashed the BDO.