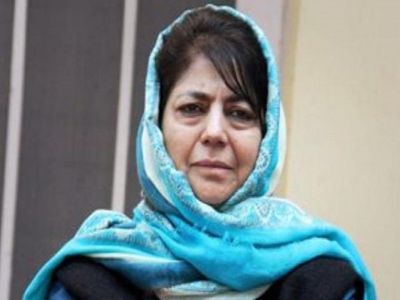 Mehbooba’s reaction comes after the Central government after the properties of National Conference (NC) president Farooq Abdullah were attached in an alleged money laundering case.

She accused the BJP of indulging in “sheer political vendetta” against political leaders of Jammu and Kashmir.

The Centre is using central agencies like the Enforcement Directorate (ED) and the National Investigation Agency (NIA) to “settle scores”, the former J&K Chief Minister said.

Mehbooba twitted that the people of J&K were least impressed & placed their faith in the alliance. Using agencies like NIA & ED to settle scores shows BJPs frustration, she added.

The ED attached multiple properties of Farooq Abdullah,  valued at Rs 11.86 crore under the Prevention of Money Laundering Act (PMLA) in connection with the laundering of funds of the Jammu and Kashmir Cricket Association (JKCA).

Among the properties attached is a house on Gupkar Road where the 84-year-old leader has been residing for several decades.