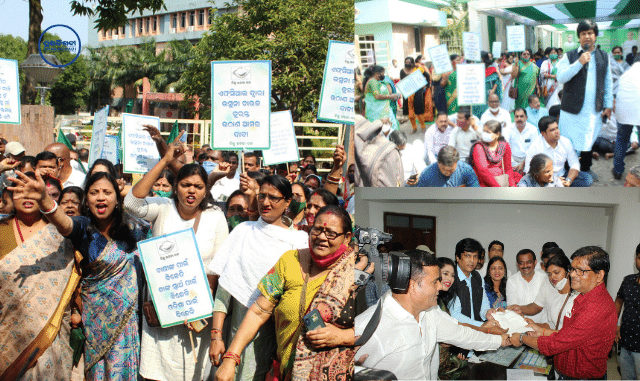 Bhubaneswar: The ruling Biju Janata Dal (BJD) on Tuesday organised a mass demonstration outside the office of the Food Corporation of India (FCI) in Bhubaneswar against the Centre’s refusal for lifting surplus parboiled rice. The BJD demanded immediate lifting of surplus par-boiled rice in the interest of the farmers of Odisha.

The  Biju Janata Dal had a press meet today on the Centre’s continued anti Odisha and anti-farmer attitude, the latest and most unfortunate being the decision not to lift surplus par-boiled rice from the state, thereby plunging crores of Odisha’s farmers into distress and hardship.

“Odisha is the third-largest contributor of rice to the Country’s Public Distribution System and Odisha’s 95% paddy produce is annually converted into par-boiled rice. The Centre, as well as the Food Corporation of India, are constitutionally mandated to lift the surplus rice from Odisha in the larger interest of the farmers of the State as the State has since been procuring paddy at the behest of the Centre,” the BJD protestors said adding that the FCI’s outright rejection to not to lift surplus par-boiled rice is a grave threat to the lives and livelihood of the farmers of Odisha.

The State has procured total targeted rice for KMS 2021-22 i.e. 52 lakh MT out of the paddy procured from the farmers of Odisha, of which, 30 lakh MT will be for domestic consumption and the remaining 22 lakh Metric ton are required to be lifted by FCI, the conch party said.

FCI has decided to lift 2 lakh MT of raw rice and out of the balance 20 lakh MT, 5 lakh Metric tons are targeted to be lifted as fortified par-boiled rice which are yet to be lifted. The balance surplus of 15 lakh MT of par-boiled rice is not being lifted by the Centre, and this has come as a blow to the lives and welfare of the farmers of Odisha, the BJD stated.

The ruling party anticipates that the farmers of Odisha especially in the districts of Kalahandi, Bolangir, Bargarh, Sambalpur, Sonepur, Nuapada, Deogarh and Nabarangpur will be seriously affected and their interests jeopardised by such insensitivity of the Centre and the arbitrary actions of the FCI.

The BJD demand that the FCI should immediately start lifting the surplus par-boiled rice of Odisha and ensure that the lives and livelihood of crores of Odisha’s farmers are not adversely affected.

On being asked, FCI DGM Dillip Sethi said that the FCI has not been instructed to lift the surplus par-boiled rice. He said: “FCI has stockpiled rice for the next five years in the country. Even if the FCI lifts more rice, storage of the same would not be possible and it will result in loss.