Bhubaneswar: The Biju Janata Dal (BJD) on Wednesday released the list of star campaigners for the upcoming Pipili bypoll.

The ruling party has fielded Rudra Pratap Maharathy as its candidate for the bypoll, which was necessitated after the demise of his father and senior leader Pradeep Maharathy.

The by-election to Pipili constituency was necessitated after the death of the sitting BJD MLA and former minister Pradeep Maharathy in October last year. 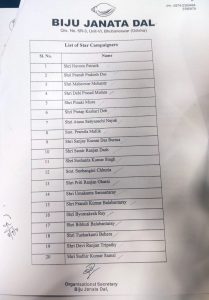 Earlier, Bharatiya Janata Party and Congress had announced its list of star campaigners.

Reportedly, the bypoll to the Assembly constituency will be held on September 30 while the counting of votes will be carried out on October 3.