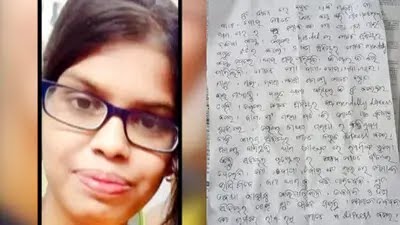 Bhubaneswar: The parents of Ruchika Mohanty, a student of BJB Autonomous College in Bhubaneswar whose body was found hanging in her college hostel on Saturday, staged a night-long protest in front of college.

The agitated parents demanded the arrest of three accused students.

The student’s father Ganeswar Mohanty alleged the college authorities had been protecting the three students who are responsible for their daughter’s death.

Meanwhile, Chairperson of Odisha State Commission for Women Minati Behera visited the college. She interacted with the hostel warden and students to find out what circumstances forced Ruchika to take an extreme step.

On the other hand, investigating police said they have identified three students who had allegedly tortured Ruchika. All concerned are being questioned and investigation is still on, said police.

Ruchika, who hailed from Athagarh in Cuttack district, was found dead on a bed inside the hostel room with a rope tied around her neck on July 2. It is being suspected that she died by suicide.

A note, suspected to have been written by Ruchika, was found near the body. In the note, it has been mentioned that she was under depression after being constantly ragged and tortured by three of her seniors. The trio has been held responsible for the death, in the note.

However, the deceased has not mentioned the names of the students.