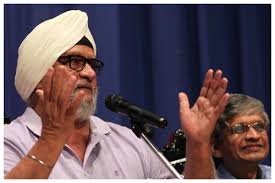 New Delhi: The spin legend Bishan Singh Bedi has criticized the decision of DDCA to install a statue of its  former President Arun Jaitley at the Feroz Shah Kotla ground.

The body plans to have a six-foot statue of him installed at the Kotla to honour his memory. Before quitting cricket administration, Jaitley was DDCA president for 14 years, from 1999 to 2013.

Bedi has even asked the body to remove his name from the spectators’ stand. He has shot a letter to DDCA President Rohan Jaitley, the son of the late politician in this connection.

Bedi’s letter said: “So, Mr President I request you to remove my name from the stand named after me with immediate effect. Also, I hereby renounce my DDCA membership”.

Worthwhile to mention that DDCA had named one of the stands after Bedi in November 2017 along with Mohinder Amarnath.

Bedi said that he is returning the honour just to assure all that four decades after his retirement, he still retain those values.

Bedi’s letter said that he was never a fan of Arun Jaitley’s working style. He said it hurts him to the core that the present leadership follows the culture of “fawning obeisance”.

The ace spinner said since the late administrator was primarily a politician, it’s the Parliament which needs to “remember him for posterity.”

Giving examples of how great cricketers are honoured  in other countries, Bedi said: “People who surround you presently will never inform you that it’s WG Grace at Lord’s..Sir Jack Hobbs at the Oval..Sir Donald Bradman at the SCG…Sir Garfield Sobers at Barbados & Shane Warne of recent vintage at the MCG…who adorn their cricket stadia with the Spirit of Cricket never out of place..