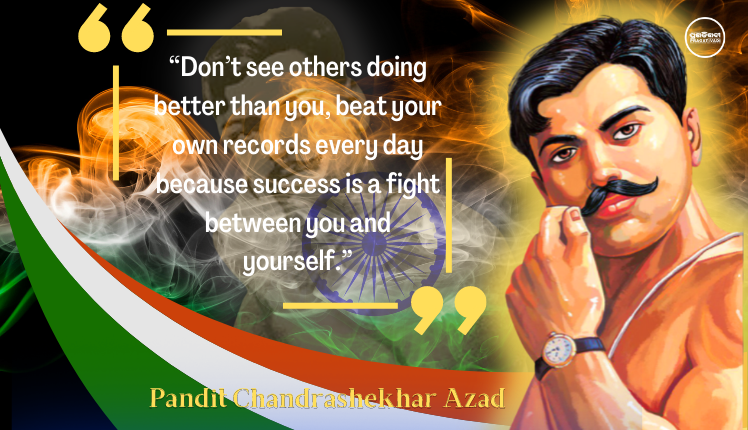 India has seen several unsung heroes during its freedom struggle and one of them is Pandit Chandra Shekhar Azad, whose birthday is today, 23rd July.

Azad was deeply troubled by the Jallianwala Bagh Massacre in Amritsar in 1919. In 1921, when Mahatma Gandhi launched the Non-Cooperation movement, Chandrasekhar Azad actively participated in revolutionary activities.

He received his first punishment at the age of fifteen. Chandra Shekhar was caught while indulging in revolutionary activities. When the magistrate asked him his name, he said: “Azad” (meaning free).

Chandrashekhar Azad was sentenced to fifteen lashes. With each stroke of the whip, the young Chandrasekhar shouted “Bart Mata Kid Jai”.

Chandra Shekhar Azad was born in a Brahmin family on July 23, 1906, in Badarka village of Unnao district in Uttar Pradesh. His parents were Pandit Sitaram Tiwari and Jagarani Devi.

Pandit Sitaram Tiwari was serving in the erstwhile estate of Alirajpur (situated in present-day Madhya Pradesh) and Chandra Shekhar Azad’s childhood was spent in the village Bhabra. On the insistence of her mother Jagrani Devi, Chandra Shekhar Azad went to Kashi Vidyapeeth, Benaras for studying Sanskrit.

After the suspension of the non-cooperation movement, Chandrashekhar Azad was attracted to more aggressive and revolutionary ideals. He committed himself to complete independence by any means. Chandrashekhar Azad and his compatriots would target British officials known for their oppressive actions against ordinary people and freedom fighters. Chandrashekhar Azad was involved in Kakori Train Robbery (1926), the attempt to blow up the Viceroy’s train (1926), and the shooting of Saunders at Lahore (1928) to avenge the killing of Lala Lajpatrai.

Along with Bhagat Singh and other compatriots like Sukhdev and Rajguru, Chandrashekhar Azad formed the Hindustan Socialist Republican Association (HRSA). HRSA was committed to complete Indian independence and socialist principles for India’s future progress.