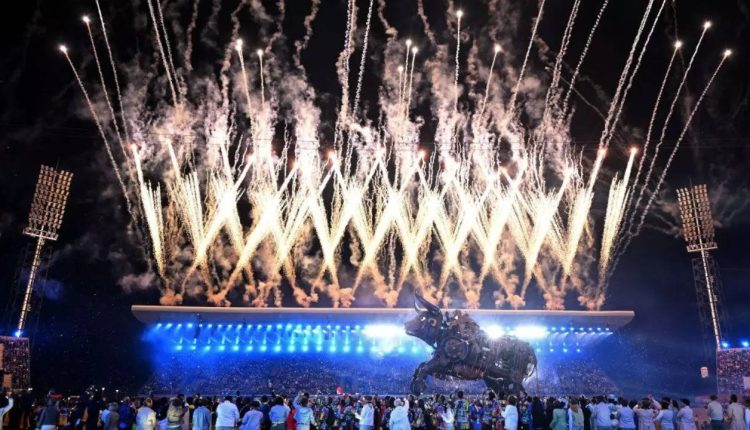 Birmingham: The region’s rich musical heritage and inclusivity were at the heart of the 22nd Birmingham Commonwealth Games opening ceremony here as a joyful evening offered a stupendous cornucopia of colour, light and dance.

Drummer-percussionist Abraham Paddy Tetteh started things off at the Alexander Stadium that was packed to the rafters, and then, Indian classical vocalist and composer Ranjana Ghatak took the lead, the section intended to showcase the diversity of the city.

It was refreshing as the Birmingham Games is the first multi-discipline event since the start of the pandemic to be held without major COVID-19 restrictions.

Meanwhile, as many as 70 cars in red, white and blue got together to form a Union Jack, even as Prince Charles, representing Her Majesty Queen Elizabeth II, arrived in his Aston Martin car along with the Duchess of Cornwall. The formation of cars was a tribute to the city’s incredible motor industry history.

Just before that, the city paid a tribute to the Queen, even as a montage featuring her stretched back to the black and white era.

After a spectacular demonstration of Birmingham’s culture and diversity, the evening paid a tribute to Charlie Chaplin, with the legendary comedian being hailed as one of the city’s heroes. Between London and Birmingham, his place of birth, in fact, has been the subject of much debate.

There was an honorary mention of William Shakespeare too, as the broadcasters spoke about the Shakespeare First Folio which is in the new Library of Birmingham — the largest public library in the UK.

Then there was a gargantuan bull in the stadium, pulled along by overworked, underpaid female chain makers of the Industrial Revolution. Till the time the raging bull was there going on a rampage, it was the cynosure of all eyes at the glittering ceremony.

Perry the Bull, the Games mascot, got its name because of the city’s iconic Bull Ring market, which has been around for hundreds of years.

“I believe this event will be one of the greatest and most important editions of the Commonwealth Games in our 92-year history,” she added.

More than 5,000 athletes are ready for action in the English city of Birmingham from Friday at a Commonwealth Games lacking many track and field superstars but still bragging elite performers.

There will be 1,875 medals up for win across all the sporting events, and for the first time ever in a global, multi-sport event, there are more women’s events than men’s.