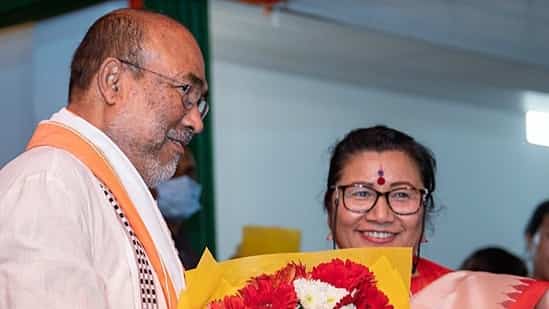 Manipur: Biren Singh will take oath as Manipur’s chief minister for a second term on Monday at 3 pm. The oath ceremony comes after days of deliberation and over a week after the election results were declared for the northeastern state.

The 61-year-old leader was chosen to be the BJP’s pick for another term, union minister Nirmala Sitharaman said on Sunday. Kiren Rijiju and Bhupendra Yadav were among other leaders who visited the state for a key party meet ahead of the announcement.

Visuals showed the top BJP leaders congratulating Singh after he was “unanimously elected” to lead. “It’s a good decision taken unanimously by everyone. It will ensure that Manipur will have a very good, stable and responsible government which will be built further because the Centre today under the leadership of PM Modi gives special attention to the northeast state. Therefore, this decision will go a long way in providing Manipur stability and good governance together,” Sitharaman told reporters.