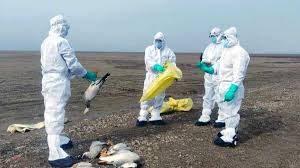 Lucknow: The district authorities in UP have been instructed to start culling infected birds even if a single case is reported.

Chief Minister Yogi Adityanath has issued directions to the animal husbandry department to formulate a plan of action for controlling the spread of bird flu.

The neighbouring states like Madhya Pradesh and Haryana, along with Kerala and Rajasthan, have already taken up culling of birds as several cases have been reported.

Bhuvnesh Kumar, principal secretary (animal husbandry), said the infection has not been noticed in Uttar Pradesh so far, but the vigil has been increased and officials are put on high alert.

Kumar said that directions have been issued to implement controlling measures as soon as even one case of bird flu is reported. He said that it was imperative to avoid the spread of the virus to humans.

He said special care has been taken to monitor poultry farms as well. The department collects samples from birds on a regular basis to check for any kind of disease, he added.