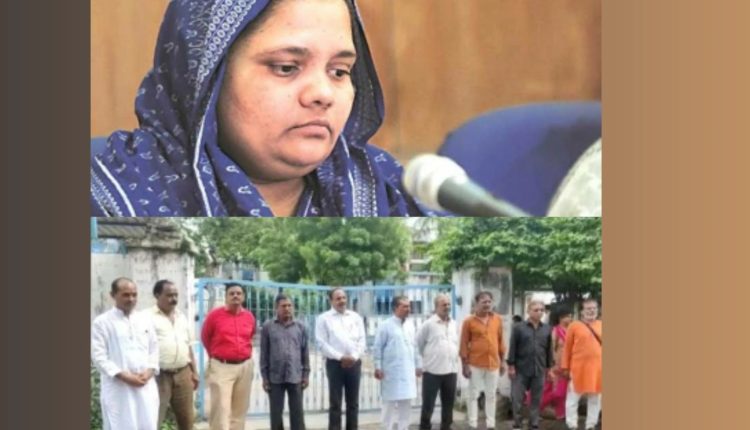 Gujarat: All 11 convicts sentenced to life imprisonment for the 2002 Bilkis Bano gang rape and murder of seven members of her family on Monday walked out of Godhra sub-jail after the Gujarat government allowed their release under its remission policy.

Bilkis Bano was 21 years old — five months pregnant — when she was raped and her toddler daughter killed along with six others from the family in Dahod district on March 3, 2002. They were hiding in fields, hoping to escape the violence that erupted after the burning of a Sabarmati Express coach that killed 59 ‘kar sevaks’ just days earlier.

A day after 11 convicts sentenced to life imprisonment for Bilkis Bano’s gang rape and murder of seven of her family during the 2002 Gujarat riots walked out of jail, her husband said he came to know of their release from the media. “We were surprised to know that the convicts have been released,” Bilkis Bano’s husband Yakub Rasul told.

“We don’t know when the convicts processed their application and which ruling the state government took into consideration. We never received any kind of notice,” Rasul said.

Rasul said the Gujarat government had paid the family a compensation of Rs 50 lakh as directed by the Supreme Court, but is yet to provide a job or a house as directed by the apex court. Rasul said he lives virtually in hiding with his wife and five sons, the eldest one 20 years old.

Meanwhile, the convicts, after their release from the Godhra jail on Monday, who were also charged with killing the pregnant Muslim woman’s three-year-old daughter, were welcomed with sweets and garlands outside the jail.

The Congress lashed out at the BJP government. Pointing out that Prime Minister Narendra Modi had spoken of women power in his Independence Day speech just hours before the state’s remission order came for the 11, Congress leader Pawan Khera asked at a press conference in Delhi whether the PM meant what he said.

The Congress also underlined the fact that the Gujarat order had come on the day India marked its 75th year of Independence.

Calling the Gujarat government order “unprecedented”, the Congress said: “You let off the convicts citing the 14 years spent by them of their sentence, that their conduct in jail was good, and the nature of the crime… If we just consider the nature of the crime, does rape not come in the category that the harshest punishment be given, that any sentence is not enough? And we saw today that those who were let off, they are being felicitated and honoured. Is this Amrit Mahotsav?”

With Tuesday marking the death anniversary of A B Vajpayee, Khera, the Chairman of the Congress’s Media and Publicity Department, said he wanted to remind Modi again of the Raj Dharma that the former PM had talked about during his visit to Gujarat after the 2002 riots.

PM Modi should come forward and clarify if what he said in his Red Fort speech were just words, with no meaning.

Khera added: “Does the PM not mean what he says? Or is it that his own party, its governments have stopped listening to him?… Or does he say one thing to the country and another to his own party’s government?”

Linking the Bilkis Bano order of the Gujarat government to what happened in the Kathua and Unnao rape cases, Khera said all of these showed the BJP government’s “mentality”. In the Kathua case, the Congress pointed out, perhaps for the first time in the country, senior leaders of the BJP hit the streets “in the support of rapists”. “Is all of this a well-thought-out strategy,” Khera asked.