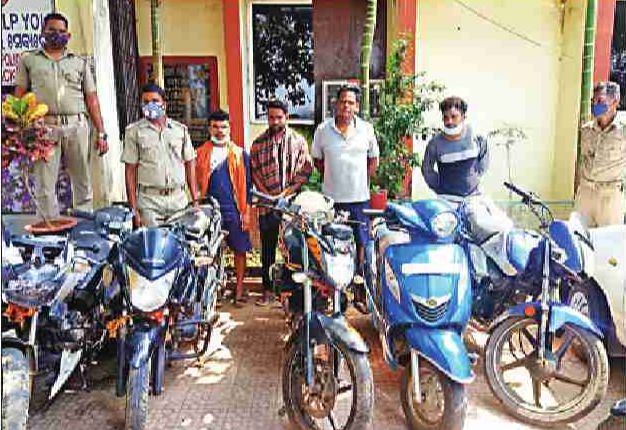 Cuttack: Cantonment Police have busted a bike lifting gang and arrested four persons who were involved in stealing motorcycles. As many as five stolen motorcycles were recovered from their possession in Cuttack.

Reportedly, the matter came to the fore after one Sajib Rao of the Pachapola Golbedi slum area lodged a complaint at the police station regarding his bike theft on January 26.

Acting on the complaint, police had registered a case under Section 379 and launched a probe in this regard. Following this, police interrogated Raju who was held for another theft case.

During interrogation, police came to know about the involvement of Raju in Sajib’s bike theft case. Later, Raju confessed about his associates involved in the bike theft.

After raiding several places, police managed to nab four accused in this connection. However, one of the accused was yet to be nabbed. The cops also recovered four stolen bikes and a scooter from their possession.

A manhunt is on to nab the absconding accused and all the accused have been forwarded to court, sources said.