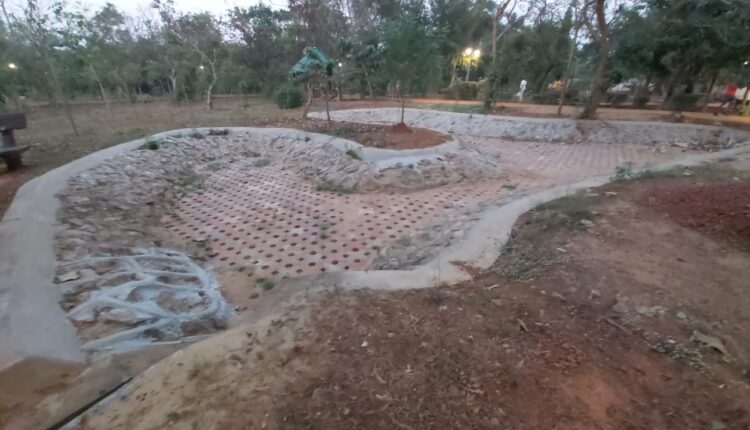 Bhubaneswar: Laying emphasis on water conservation and ground water recharge in the state capital Bhubaneswar amid the unpredictable weather conditions, the Bhubaneswar Development Authority (BDA) has constructed the Rainwater Harvesting (RWH) system in the Biju Patnaik Park, popularly known as the ‘Forest park’.

This is the first park in the city to have this facility which can greatly help in reducing waterlogging and flooding by ensuring that rainwater goes into the ground quickly to avoid groundwater depletion.

The RWH structure in the Biju Patnaik Park is a land-based system, and there is a total of nine recharge pits were constructed at appropriate locations in the park, which spreads over an area of 22 acres of land.

A recharge pit is 1.5m wide and 1.5m deep. One recharge well is recommended for 1/4 hectare. All the surface runoff is filtered and led into the recharge well. In summer, water can be drawn for irrigating the park. The RWH structures at the Biju Patnaik Park was installed with a cost of around Rs 11 lakh.

“The purpose of putting up rainwater harvesting structures in parks is to recharge the groundwater. Usually, a huge quantity of rainwater goes into drains and wasted. With little planning and expenditure, we can easily stop the waste of this precious resource and use it for recharging the groundwater on a massive scale,” said BDA Chief Engineer-cum-Engineer Member, Shri Rajendra Kumar Nayak.

On average, Bhubaneswar receives 1,200 mm rainfall every year. Under natural conditions about – gets charged into groundwater and the remaining runs off or goes into drains.

The BDA has started process and construction works of RWH structures in other major parks in the city. The development authority is planning to introduce this facility in around 32 parks across the city. The facilities are being developed with an aim to create awareness among citizens, especially children, on the need for water-saving.

“If we undertake rainwater harvesting in every park, we can replenish groundwater on a massive scale. For each square metre of area, we can collect about 1,000 litres of water per year. A park of 200 square metres area can conserve 2 lakh litres of water every year,” Shri Nayak added.

This apart, the rainwater harvesting has other benefits too in an urban setup, where the ground water level is fast depleting. Low lying areas in the city get submerged because large quantities of water come out of every park during heavy rains in the rainy season. Rainwater harvesting will not only solve the inundation problem, but it will also improve the quality and quantity of water in the water table.

A rainwater harvesting system consists of the following components:

1. Catchment from where water is captured and stored or recharged

2. Conveyance system that carries the water harvested from the catchment to the storage/recharge zone

3. First flush that is used to flush out the first spell of rain

Zero Night celebrations in Bhubaneswar prohibited due to Covid-19 pandemic