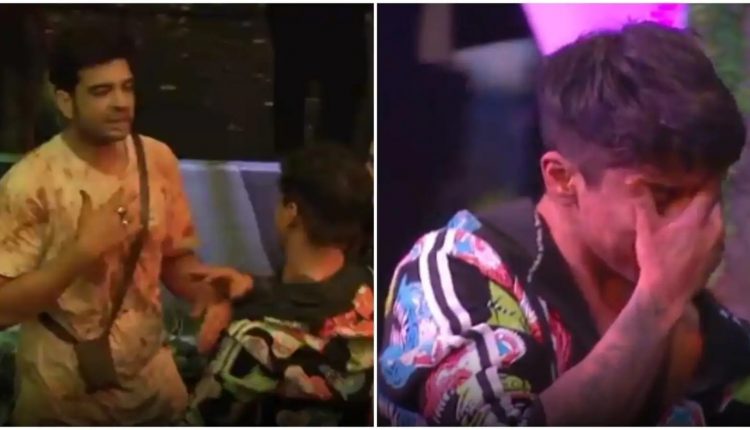 Mumbai: While Bigg Boss 15 contestants Karan Kundrra and Pratik Sehajpal again got into a brawl inside the house, Pratik was seen breaking down after their fight.

As the video started, Karan Kundrra threw something at Nishant Bhat who was standing with his back towards him. Pratik Sehajpal then rushed towards him saying, “Oye” to which Karan replied, “Kya hai (What)?” Pratik responded, “Maar kyun raahe ho (Why are you hitting him)?” Karan said, “Kahan maara (When did I hit him)?” While having the argument, Karan walked towards Pratik and slammed his body against his.

The duo then got into a physical fight as they shoved each other while Nishant Bhat, Devoleena Bhattacharjee and Rashami Desai tried to break up the fight. As the video continued, Pratik was seen holding Rakhi Sawant and telling her, “He kicked me like this.” Karan was heard telling others, “Nahi mara. Jao camera check karlo (I didn’t kick him. Go and check the camera).”

Next, Pratik charged towards him and said, “Main sar phaad ke jaunga aapka, yaad rakhna (Remember, I’ll break your head before leaving).” As Karan tried to reply, Pratik screamed at him, “Chup raho. Muh bandh (Keep quiet. Shut up).” Karan, who was seated, jumped out from his seat and told him, “Open challenge hai (I’m giving you an open challenge).”

As others tried to keep them away from each other, Pratik shouted at Karan, “Saale mentor tu jaha pe bhi raha lekin yaha pe tu ekdum ghatiya hai. Abe thu hai tu (You could be a mentor elsewhere but here you are extremely horrible).” Karan was Pratik’s mentor in the show Love School.

On the other hand, while talking to Pratik, Tejasswi talks about inappropriate touching. She says she has even taken his slap. “Kholu main apna mooh, task mein tera haanth ladkiyon ko kahan kahan lagte hain. Thappad tak pade hue hain,” Tejasswi says. Later, we see Pratik crying and wondering till what extent the madness can go. He says, “Mere ko rona aa raha hai, kya karoon (I feel like crying) and to what extent can this go? I just want to know that.”