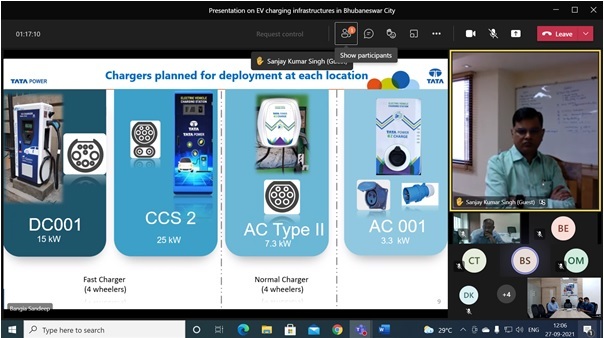 Bhubaneswar: For the development of a robust electric vehicle (EV) charging infrastructure across the State Capital, a meeting was organised today under the chairmanship of BMC Commissioner-cum-CEO Bhubaneswar Smart City and Vice-Chairman Bhubaneswar Development Authority, Sanjay Kumar Singh.

The meeting discussed about the EV charging stations to be built across the city to be used by public and the public transport vehicles in near future. The priority on selection of locations would be given mainly to malls, public parking lots, hotels, residential complexes, work places and highways. It is learnt that the city is going to add a fleet of electric buses to its public transport network.

It can be mentioned here that in the past during last two years BSCL had tried a lot to make a progress on the EV infrastructure front. However, it is the new CEO of the Smart City, who spearheaded the progress and the process could materialize now to take shape.

During the deliberation on the EV charging stations in the city, different EV vehicle infrastructures adopted by other leading cities like Delhi, Mumbai, Ahmedabad and Jaipur were discussed.

Easy Yet Effective Yoga Poses You Can Do Anywhere