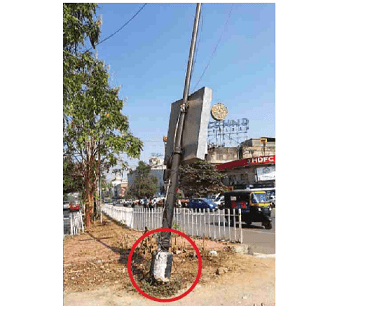 Bhubaneswar: In an instance that can pose fatal dangers to locals and passersby, an electric pole has been in standing in a dangerous condition even after years have passed since Cyclone FANI ravaged Odisha including its capital city Bhubaneswar.

The estimated weight of the electric pole would be around 1.5 quintals.

Reportedly, the pole situated at Master Canteen Square, that has tilted towards the ground is spotted standing only on the support of three GI wires, while the base that was built with cement is corroded. Thus, passersby remain at risk of some unwanted accident, especially during rain or storm.

If it falls on pedestrians, it may lead to fatalities as well, fear residents. However, the civic bodies are yet to bring their focus on the issue.

Odisha CM Naveen has assets worth over Rs 64 Crore!

Five Jumbo Including Two Calves Rescued From Mud In…