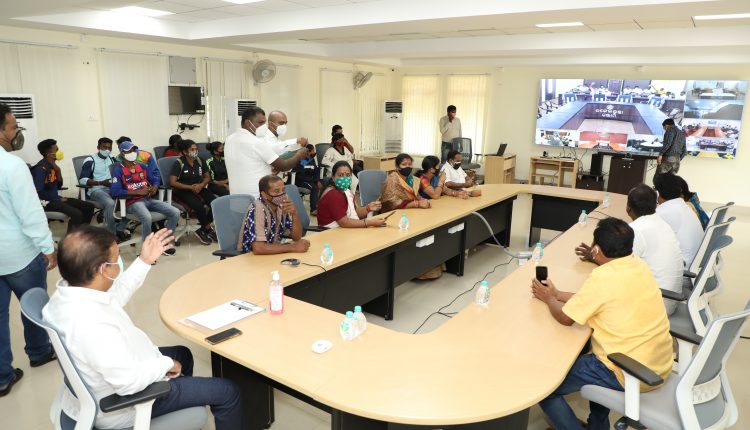 Bhubaneswar: Bhubaneswar North MLA Susant Rout proposed setting up of a multi-purpose indoor sports stadium in his constituency in a virtual meeting with Chief Minister Naveen Patnaik held on Thursday. Rout forwarded a letter requesting for the same on behalf of the budding athletes from various schools in his constituency.

Since the successful hosting of the Hockey World Cup in 2018, the Odisha government under Chief Minister Naveen Patnaik has been consciously working towards developing Bhubaneswar as the “sports hub” of the country. Several initiatives in recent years, such as building world class sports infrastructure in multiple districts, conducting various training programmes under which the athletes are accommodated at state-run hostels and are provided with sponsored education, and sponsorship of all National Hockey Teams for the next 5 years, are testament to its commitment.

In the meeting, Rout thanked the Chief Minister for his longstanding endeavours to promote a vibrant sports culture in the state and highlighted the need for having a multi-purpose indoor stadium in Bhubaneswar North, in order to motivate gifted children and youth in the constituency to take up sports at a professional level. He also emphasized that such a facility would promote fitness benefits among the youth. Three such youngsters, namely, Rituparna Mohanty, a state level badminton player, Ranjit Nayak, a national level Kick Boxing player, and Subhasmita Mallick, a young Karate enthusiast briefly spoke to the Chief Minister, who applauded them for their heroics.

The meeting ended with the Chief Minister promising to look into the Rout’s request of setting up of a world class multi-purpose indoor sporting stadium in the constituency and revert back with a definitive action plan soon.

Huge Cache Of Marijuana Seized In Ganjam’s Aska, One Held