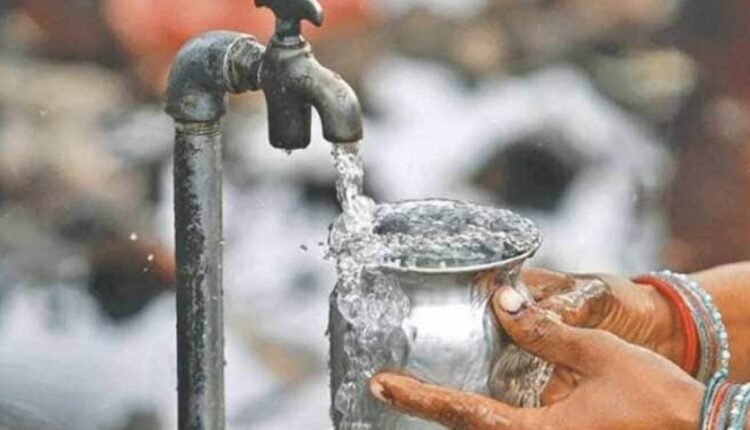 Around 90% rural households have access to piped drinking water supply in the State. The State plans to achieve 100% saturation by October, 2022.

The villages of Bhavnagar district have dual source planning. Following a good monsoon, water from open wells, which this year had reached up to 8-18 ft in October, is used for drinking water supply. During dry months, villages draw water from the Mahi Pariage Regional Water Supply Scheme (the scheme gets water from Mahi River as well as Narmada when required). GWSSB provides water supply up to the village level. A good number of rural households in the district also practice rainwater harvesting.

Bhavnagar had about 85% rural households with provision of tap water supply when JJM was launched in August, 2019. Even in villages without tap water supply, communities were familiar with the participatory planning approach. These villages missed previous opportunities of household piped drinking water supply either for the lack of community unanimity on the contribution of 10% cost of in-village water supply works and payment of monthly O&M charges or the lack of motivation in pursuing the scheme. These villages are now clearly eager to get their JJM in-village schemes and are actively working with their programme Implementation Support Agency and the government.

CSPC through its community mobilization, awareness and capacity building programme has played a key role. In the initial stages during Covid-19 pandemic restrictions, CSPC raised awareness on programme components, the roles and responsibilities of Pani Samitis, health benefits of household supply of potable piped water supply, etc., through digital media such as WhatsApp groups, animation films, etc. the CSPC had undertaken campaigns that mobilized community contribution and ensured programme ownership by the Gram Panchayat. According to CSPC field managers and trainers, even villages without FHTC had their Pani Samitis set up during the previous programme. CSPC activated these Pani Samitis for implementing in-village water supply systems under JJM Programme by raising their programme awareness and capacity building through training. In some villages, where Panchayat elections had taken place, CSPC helped Gram Panchayats set up their Pani Samitis.

Training of Pani Samitis in water quality testing, monitoring and surveillance using field test kits were undertaken. Currently, WASMO conducts pre and post-monsoon water quality assessments through water quality laboratories. In villages, where the schemes are now operated by Pani Samiti, households pay minimum monthly user charges. Some Pani Samitis collect user charges on monthly basis, whereas a few Samitis have set up a system of half-yearly collection of water charges –either during Diwali or Holi.

In Gujarat’s rapid scaling up of rural piped drinking water supply some factors have played a catalytic role:

According to CSPC and WASMO officials, one factor that has worked in Gujarat is the direct communication with village women about drinking water supply schemes as mostly women, are responsible for collecting water for their households. Women are more responsive to the health aspects of potable piped water supply and take determined position for improving their lot.

Working in tandem, the district water and sanitation administration and local media in Gujarat have played an important part in rallying villagers and Gram Panchayats into action. The details of in-village schemes sanctioned by the District Administration are published by the local newspapers and other media. This has had a positive impact in rallying villagers and panchayats towards the programme objectives. Media mention has encouraged the Sarpanchs to lead their in-village schemes.

Apart from training Pani Samitis in various aspects of in-village water supply and management, the Government of Gujarat recognizes their work and efforts through annual awards and recognition. On World Water Day, a Pani Samiti with a good track record in O&M of their in-village water scheme gets an award equivalent to 10% of its in-village scheme cost as a fixed deposit with a three-year lock-in period. To encourage women participation in Pani Samitis, through another reward, the government of Gujarat also recognizes the work of all-women Pani Samitis. Such encouragement of women in the water sector has encouraged a competitive spirit in water distribution management and good results for Gujarat.

Adopting a futuristic approach, WASMO has designed a strategy to build the capacity of Pani Samiti/ Gram Panchayat of villages in gathering and analysing O&M information of in-village schemes; MIS data verification related to water quality testing and uploading the data in the MIS; training of pump operators, plumbers and electricians; understating the provisions of water audit in reference to the Gujarat Domestic Water (Protection) Act; village management of greywater; drinking water and sanitation provisions under 15th Finance Commission Grant; chlorination of village drinking water distribution system; and benefits of daily water supply. Under the training programme, CSPC organises street plays to reinforce the training messages. In this, CSPC has partnered with WASMO for 100 village of Bhavnagar to facilitate such interventions to make Pani Samitis more responsible and responsive.