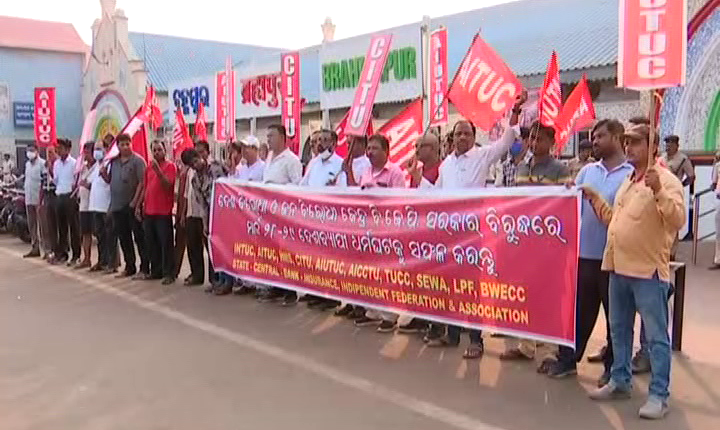 Sectors, where notices of strikes have been issued by workers’ unions, include banks, insurance, income tax, postal, telecom, power, oil, steel, coal and copper. Bank employees’ unions have said they will support the strike. Informal workers in sectors like farming are also expected to join the nationwide protest in rural parts of the country, reports added.

On Monday morning, Trade Union leaders staged a blockade at Bhubaneswar railway station protesting privatisation of Government-owned companies, price rise and other Central Government policies. Two trains were blocked by the protesters at the railway station while the movement of buses was also ceased from Baramunda bus stand.

Normal life was affected due to picketing by agitators at various places. Similar reports came from Cuttack, Berhampur, Sambalpur, Rourkela and other major towns of the State. There was a long queue at petrol pumps in the Capital City on Sunday night. Petrol pumps were closed for a couple of hours on Monday morning but services resumed as consumers, especially the auto-rickshaw drivers appealed to the staffers.

Despite the threat of the Essential Services Maintenance Act (ESMA), workers in departments like roadways, transport and electricity have also announced decision to join the nationwide strike, reports stated.

90-Year-Old Succumbs To COVID-19 In Odisha