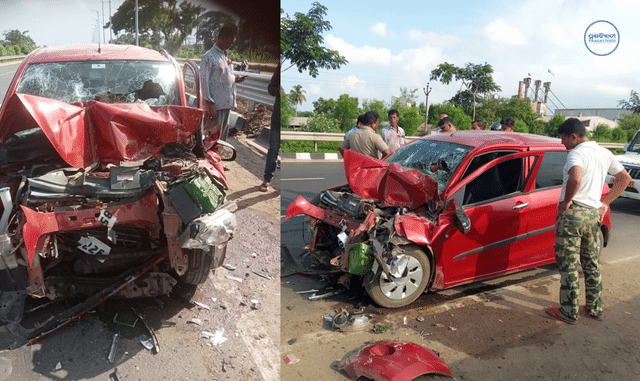 Bhadrak: A man died and his wife was critically injured after the car in which they were travelling, dashed into a concrete mixer machine on NH-16 near Rahanja Chhak in Bhadrak district on Monday.

The deceased has been identified as Surendra Sahu (45), an employee of the Electricity department, hailing from Asurali area in this district.  Surendra’s wife Sudhansubala (40), was seriously injured in the accident.  Fortunately, the couple’s three-year-old daughter survived the crash unharmed.

This afternoon, Surendra alias Bajua, the youngest son of Yogesh Chandra Sahu— a veteran social worker from Ganesh Nagar, along with his wife and baby girl, was en route in his car to his in-laws’ house to see his ailing father-in-law in Soro of Balasore.

While, Surendra was driving the car, his wife was sitting in the front passenger seat holding their daughter on her lap, sources said adding that the car hit the moving concrete mixer machine from the rear at a high speed.

The collision was so intense that the car was badly mangled and the couple sustained serious injuries.

Some locals rushed to their help and pulled them out along with their child lying on the car’s floor unharmed. They all were rushed to the Bhadrak District Headquarters Hospital.

However, Surendra succumbed to his injuries at the hospital after a few minutes. In the meanwhile, his wife, Sudhansubala has been shifted to Cuttack SCB Medical College and Hospital as her condition deteriorated.

A pal of gloom descended in Asurali area following the tragic incident.