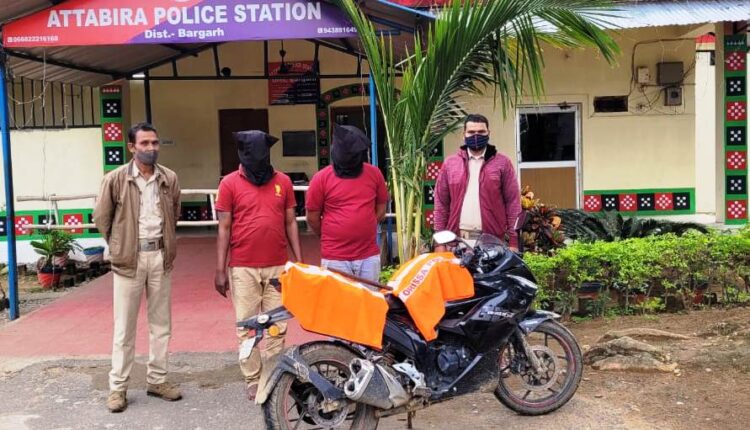 Bhadrak: Two persons were arrested in Bhadrak on Saturday for posing themselves as officers of Special Squad and extorting money from people.

The arrested imposters have been identified as Suman Sekhar Panigrahi (26) of Sindurbahal in Bargarh Sadar PS area and Rajesh Meher (36) Canalpada of Town PS area, the police said in a press note.

The police said that one motorcycle, two orange colour radium jackets with Odisha Police printed on them, one blue colour benet cap without monogram, four mobile phones, one iron pipe and Rs 2000, cash has been seized from them.

According to the press note, one Tuna Mirdha of Rengali Karlatikra, who owns a grocery shop in the locality, lodged a complaint with Attabira police alleging that two unknown people identifying themselves as officers of a Special Squad of police extorted Rs 2000 for keeping the shop open till 9 am on Friday night.

Acting on the plaint, the police launched a probe and nabbed the duo today while recovering the extorted cash amount. During interrogation, the accused duo confessed to have committed robbery of two mobile phones and Rs 8,000 cash from two persons near Attabira railway station on 6th January.

Both the accused have been forwarded to the court of NGN-Cum-JMFC, Attabira today, the police added.

They were also found to be involved in various cases in Bargarh Town, Bolangir Sadar and Town police station areas, the press note further mentioned.