After successfully completing its maiden flyby around Mercury last year, the ESA/JAXA BepiColombo mission is gearing up for its second close flyby of Mercury on June 23, 2022.

ESA’s spacecraft operation team is guiding BepiColombo through six gravity assists of the planet before entering orbit around it in 2025. Like its first encounter last year, this week’s flyby will also bring the spacecraft to within about 200 km (124 miles) altitude above the planet’s surface. Closest approach is anticipated at 09:44 UT (11:44 CEST). 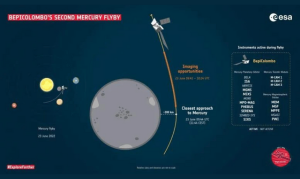 The primary purpose of the flyby is to use the planet’s gravity to fine-tune BepiColombo’s trajectory. Having been launched into space on an Ariane 5 from Europe’s Spaceport in Kourou in October 2018, BepiColombo is making use of nine planetary flybys: one at Earth, two at Venus, and six at Mercury, together with the spacecraft’s solar electric propulsion system, to help steer into Mercury orbit against the enormous gravitational pull of our Sun. 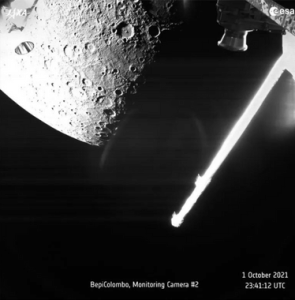 Even though BepiColombo is in ‘stacked’ cruise configuration for these brief flybys, meaning many instruments cannot yet be fully operated, it can still grab an incredible taste of Mercury science to boost our understanding and knowledge of the Solar System’s innermost planet. A sequence of snapshots will be taken by BepiColombo’s three monitoring cameras showing the planet’s surface, while a number of the magnetic, plasma, and particle monitoring instruments will sample the environment from both near and far from the planet in the hours around close approach.Even during fleeting flybys these science ‘grabs’ are extremely valuable,” says Johannes Benkhoff, ESA’s BepiColombo project scientist. “We get to fly our world-class science laboratory through diverse and unexplored parts of Mercury’s environment that we won’t have access to once in orbit, while also getting a head start on preparations to make sure we will transition into the main science mission as quickly and smoothly as possible.”

A unique aspect of the BepiColombo mission is its dual spacecraft nature. The ESA-led Mercury Planetary Orbiter and the JAXA-led Mercury Magnetospheric Orbiter, Mio, will be delivered into complementary orbits around the planet by a third module, ESA’s Mercury Transfer Module, in 2025. Working together, they will study all aspects of this mysterious inner planet from its core to surface processes, magnetic field, and exosphere, to better understand the origin and evolution of a planet close to its parent star. Dual observations are key to understanding solar wind-driven magnetospheric processes, and BepiColombo will break new ground by providing unparalleled observations of the planet’s magnetic field and the interaction of the solar wind with the planet at two different locations at the same time.

On course for slingshot

Gravitational flybys require extremely precise deep-space navigation work, ensuring that a spacecraft passes the massive body that will alter its orbit at just the right distance, from the correct angle, and with the right velocity. All of this is calculated years in advance but has to be as close to perfect as possible on the day.

Getting into orbit around Mercury is a challenging task. First BepiColombo had to shed the orbital energy it was ‘born’ with as it launched from Earth, which meant it first flew in a similar orbit to our home planet – and shrinking its orbit down to a size more similar to Mercury’s. BepiColombo’s first flybys of Earth and Venus were thus used to ‘dump’ energy and fall closer to the center of the Solar System, while the series of Mercury flybys are being used to lose more orbital energy, but now with the purpose of being captured by the scorched planet.

For this second of six such flybys, BepiColombo needs to pass Mercury at a distance of just 200 km (124 miles) from its surface, with a relative speed of 7.5 km/s (4.7 mi/s). In doing so, BepiColombo’s velocity in relation to the Sun will be slowed by 1.3 km/s (0.8 mi/s), bringing it closer towards Mercurial orbit.

“We have three slots available to perform correction maneuvers from ESA’s ESOC Mission Control in Darmstadt, Germany, in order to be in precisely the right place at the right time to use Mercury’s gravity as we need it,” explains Elsa Montagnon, Mission Manager for BepiColombo.

“The first such slot was used to tune the desired flyby altitude of 200 km over the planet’s surface, ensuring the spacecraft would not be on a collision course with Mercury. Thanks to the meticulous work of our Flight Dynamics colleagues, this first trajectory correction executed very accurately such that further slots were not needed.”

During the flybys it is not possible to take high-resolution imagery with the main science camera because it is shielded by the transfer module while the spacecraft is in cruise configuration. However, BepiColombo’s three monitoring cameras (MCAMs) will be taking photos.

Because BepiColombo’s closest approach will be on the planet’s nightside, the first images in which Mercury will be illuminated are expected to be at around five minutes after close approach, at a distance of about 800 km (497 miles). 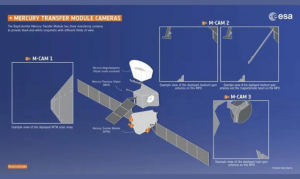 The cameras provide black-and-white snapshots in 1024 x 1024 pixel resolution, and are positioned on the Mercury Transfer Module such that they also capture the spacecraft’s solar arrays and antennas. As the spacecraft changes its orientation during the flyby, Mercury will be seen passing behind the spacecraft structural elements.

The first images will be downlinked within a couple of hours after closest approach; the first is expected to be available for public release during the afternoon of June 23. Subsequent images will be downlinked throughout the remainder of the day and a second image release, comprising multiple new images, is expected by Friday morning. All images are scheduled to be released to the public in the Planetary Science Archive on Monday, June 27.

For the closest images it should be possible to identify large impact craters and other prominent geological features linked to tectonic and volcanic activity such as scarps, wrinkle ridges, and lava plains on the planet’s surface. Mercury’s heavily cratered surface records a 4.6 billion-year history of asteroid and comet bombardment, which together with unique tectonic and volcanic curiosities will help scientists unlock the secrets of the planet’s place in Solar System evolution. 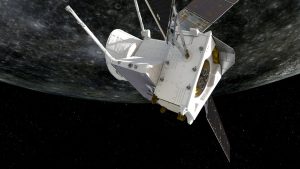 Five Bad Habits That Can Cause Pimples