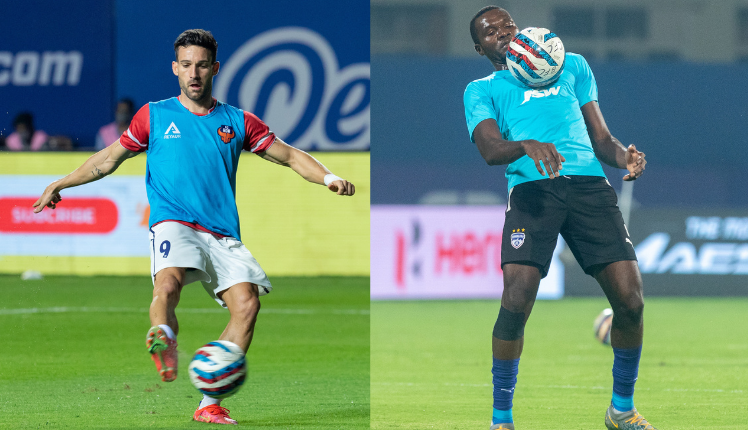 Goa: Two teams experiencing a varied run of form yet running neck-to-neck on the points table face off when Bengaluru FC take on FC Goa at the Athletic Stadium, Bambolim in 2021-22 Hero Indian Super League’s first game of the double-header on Sunday.

Bengaluru FC arrive into the clash on the back of a five-match unbeaten run. After being pushed to second-bottom, the Blues commenced a turnaround mid-December, which sees them now 8th on the table. A win against FC Goa could take them to 16 points and two places higher.

The Blues have adopted an entertaining brand of football lately, rubber-stamped by their 3-0 win against defending champions Mumbai City FC in the last outing. Marco Pezzaiuoli has been buoyed by Prince Ibara’s newfound goalscoring form. His physicality, strength, and aerial ability makes Bengaluru FC dangerous from set-piece situations. He has scored 2 goals off corners this season. Three of the four goals scored by the Congolese striker have been headers.

Full-back Roshan Singh is having a breakout season as well. The 22-year-old already has five assists to his name. He requires one more to become the highest Indian assist-provider in a single Hero ISL season. Interestingly, 3 of Ibara’s 4 goals have come off Roshan’s assists.

The last time these two sides net, FC Goa nicked the game 2-1 at the same venue. Bengaluru Head Coach Pezzaiuoli is confident of negating a repeat. “We have learnt from our mistakes from the first game. We have now got some good momentum and our players are motivated to do well,” said the German tactician.

FC Goa Head Coach Derrick Pereira had praise for Bengaluru FC. “They have changed their formation and playing style. They will be a tough side to beat.”

The Gaurs have not been experiencing the best of results on the field. They failed to win their last two games – both against opponents placed lower on the league table. Gifting SC East Bengal their first win of the season midweek only rubbed salt onto their wounds. FC Goa have played 12 games, winning only 3. They are placed 9th on the table with 13 points in their kitty.

“It is true that things have not been going according to plan but we are now going into the games with a different mindset. I believe miracles happen,” Pereira said, still hoping to make the semi-finals.

Lack of bite in the final third has been FC Goa’s Achilles Heel. They have the lowest goal conversion rate out of all teams (7.6%). However, they have attempted the most shots so far (184) and the second-most shots/match (15.33) this season.

India’s Biggest Electronics Sale, Is Back At Reliance Digital