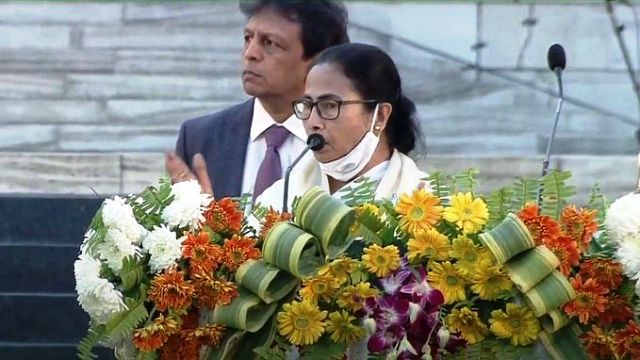 The celebration was held at Victoria Memorial in Kolkata. Prime Minister Narendra Modi was present at the programme.

Banerjee said :”I think the government’s program should have dignity. This is not a political program…it doesn’t suit you to insult someone after inviting them. As a protest, I won’t speak anything”.

PM Modi had landed in Kolkata this afternoon to participate in the 125th birth anniversary celebrations of Netaji Subhas Chandra Bose.

A grateful nation will always remember his sacrifice and dedication for India’s independence , Prime Minister said while paying rich tributes to Netaji.

He announced that the Howrah-Kalka Mail is being renamed as Netaji Express and added that Netaji reached Andamans and unfurled the Tricolour with his own soldiers.

The world is witnessing powerful avatar of India from the Line of Actual Control (LAC) to the Line of Control (LoC), PM Modi said and added that  India today is giving a befitting reply wherever attempts are made to challenge its sovereignty and integrity.

He said it was Netaji who considered poverty, illiteracy and disease are the problems for India. He was of the view that these could be tackled with collective endeavour.