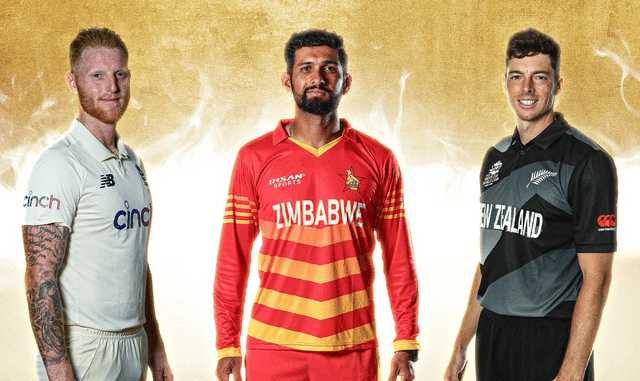 Three extraordinary all-rounders—Ben Stokes of England, Sikandar Raza of Zimbabwe, and Mitchell Santnerof New Zealand have been shortlisted for ICC Men’s Player of the Month for August 2022.

England Test captain Ben Stokes played a crucial role in his side’s comeback in the ongoing series at home against South Africa.

In the second Test at Manchester, Stokes broke the back of the South African middle-order with the wickets of Aiden Markram and Rassie van der Dussen as the visitors were knocked over for 151.

He followed it up with a brilliant century that came when England were in a spot of bother having lost early wickets on day two. His knock of 103 was studded with six boundaries and three sixes, helping his side attain a massive lead of 264.

In the second innings, Stokes broke the stubborn 87-run stand between Rassie and Keegan Petersen. He accounted for both their wickets in a quick span to set up an innings win and level the series 1-1.

Prior to that, in the first Test, Stokes scored a handy 40 runs in total and also picked up three wickets but that wasn’t enough to stop his side from slipping to an innings defeat at Lord’s.

Sikandar Raza has enjoyed a tremendous 2022 and the month of August was no different. Going head to head against Asian giants India and Bangladesh, Raza notched up three centuries in the month.

All three centuries came when Zimbabwe looked down and out before the 36-year-old came to the rescue, leading them to victory twice against Bangladesh and almost pulling off the impossible against India.

In the first ODI against Bangladesh, Zimbabwe were 62/3 chasing 304 for the win when Raza and Innocent Kaia stitched a massive 192-run stand for the fourth wicket. He was the aggressor of the two and batted till the end, remaining unbeaten on 135 of 109 balls as Zimbabwe scripted a memorable win over the Tigers.

In the next match, the hosts were in dire straits yet again at 49/4 chasing 292 when he once again pulled the rescue act. This time, it was Regis Chakabva who kept him company. Once again, Raza (117* off 127 balls) batted through till the end to guide Zimbabwe to the second win in a row as Zimbabwe took an unassailable lead in the series. He was also Zimbabwe’s star with the ball in hand and despite bowling the difficult overs in the death, ended up with figures of 3/56 in his 10 overs.

Raza almost pulled it off in the final ODI against India as well but unlike the previous occasions, found little support from the other end. Chasing 290, he was at the crease until the penultimate over. The 95-ball 115 went in vain as India held their nerve in the final stages to complete a whitewash.

New Zealand all-rounder Mitchell Santner enjoyed a brilliant August 2022 both with the bat and ball in hand and played a crucial role in the Black Caps’ six wins out of eight in the month.

After a quiet showing in the first game of the series against the Netherlands, Santner, the captain for the series, promoted himself up the order to No.3 in the second T20I and blasted a 42-ball 77* as New Zealand chased down 150 with six overs to spare.

The star all-rounder carried his form over to the Caribbean as he picked up three wickets each in the first two T20Is to help wrap up the series with a game to spare. In the first two ODIs, Santner played two handy knocks with the bat. He picked up two wickets in the final ODI and was adjudged the Player of the Series for his all-round exploits.