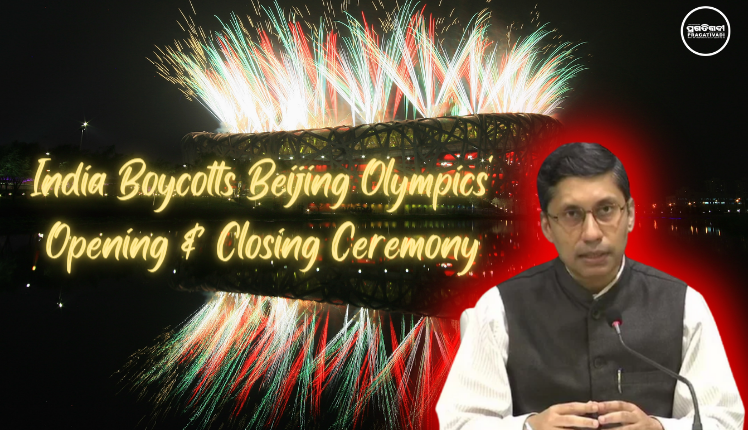 New Delhi: The Ministry of External Affairs on Thursday said that the Indian Envoy would not be attending the opening or closing ceremony of the Beijing Winter Olympics.

These developments come a day after day after Chinese State media reported that a People’s Liberation Army (PLA) commander involved in the June 2020 Galwan Valley clash with Indian Army troops was made torchbearer at the event.

Ministry of External Affairs spokesperson Arindam Bagchi on Thursday said it was regrettable that China has chosen to politicise the Olympics.

Reacting to the MEA announcement, Prasar Bharti CEO Shashi Shekhar Vempati tweeted that DD Sports would not telecast live the opening and closing ceremonies of the Winter Olympics being held in Beijing.

A top US lawmaker from the powerful US Senate Foreign Relations Committee also condemned China’s decision to make the commander a torchbearer at the Beijing 2022 Winter Olympic Torch Relay.

“It’s shameful that Beijing chose a torchbearer for the Olympics 2022 who’s part of the military command that attacked India in 2020 and is implementing genocide against the Uyghurs. The US will continue to support Uyghur freedoms and the sovereignty of India,” tweeted Jim Risch, US Senate Foreign Relations Committee Ranking Member.

The eastern Ladakh border standoff between India and China erupted in April-May, 2020, following a violent clash in the Pangong lake areas. As many as 20 Indian soldiers and around 45 Chinese troops (unofficial toll) were killed. China, however, had officially put the PLA toll at five. The standoff had become one of the fiercest border clashes between the two armies since the 1962 war.