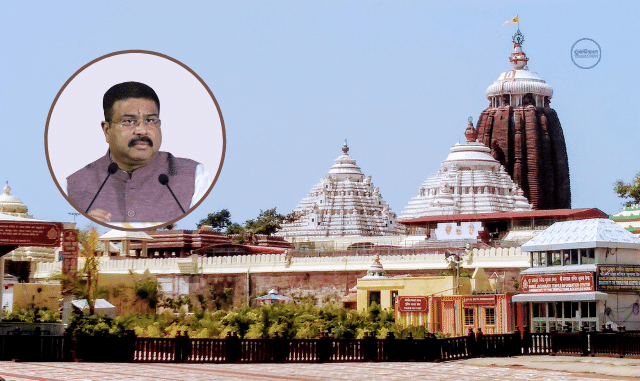 Angul: With various reports and statements are coming every now and then over the Srimandir Parikrama project, Union Minister Dharmendra Pradhan has stated that the beautification of Srimandir surrounding should be done within the framework of law.

In his reactions to the issue, Mr. Pradhan told the media today that in the cultured state of Odisha, mutts, monasteries, and temples hold a special significance in terms of heritage and traditions. “The Indian government has a system in place to protect all of this and the state governments should abide by it, the Union Minister said.

Pradhan said that no one is complaining on the beautification work around the 12th century shrine but various report on the project’s authenticity is somewhat alarming.

As ancient sculptures and other relics dating back to thousands of years have been found in the vicinity of the shrine, the beautification work being carried out under the Srimandir Parikrama project should not be overlooked, Pradhan emphasized.

“As a devotee of Lord Jagannath and according to Odia culture, I would expect the temple surroundings to be beautified within the framework of the law,” the Union Minster concluded.

CAF constable injured in IED blast by Naxals in Bijapur