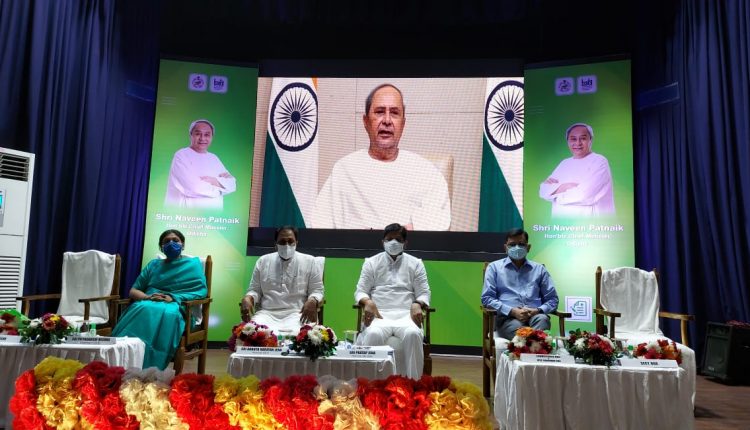 Bhubaneswar: The Bhubaneswar Development Authority (BDA) and Odisha State Housing Board (OSHB) have distributed ‘Lease Deed’ to more than hundred beneficiaries of different schemes of these two organisations at a function jointly organized by BDA and OSHB held at Jaydev Bhawan in the State Capital today.

Total 121 lease deeds, which includes 78 of BDA and 43 of OSHB were handed over to the beneficiaries. Each beneficiary was given a plant along with their property title document to encourage them planting a tree and taking care of it like their family member.

The decision of handing over lease deed to beneficiaries was taken after Hon’ble Chief Minister of Odisha Shri Naveen Patnaik had exempted interest in respect of six schemes of BDA and five housing schemes to the tune of over Rs 29.15 crore, giving a huge relief to beneficiaries.

Shri Pratap Jena, Hon’ble Minister of Panchayati Raj & Drinking Water, Law, Housing & Urban Development Department, Government of Odisha, graced the occasion as Chief Guest. “As many as 2083 beneficiaries (1925 of OSHB and 878 of BDA) will be benefitted as they will get their lease deed of their properties in different housing schemes. This has become possible due to our Hon’ble Chief Minister Shri Naveen Patnaik’s visionary leadership and timely step in waiving off interest to the tune of Rs 29.15 crore. Besides, our Hon’ble Chief Minister has made various services available online to citizens for a convenient, efficient, and transparent delivery of services to the people,” the Minister said.

Shri Priyadarshi Mishra, Hon’ble Chairman of Odisha State Housing Board, also addressed the gathering and said the decision of waiving off interest by Hon’ble Chief Minister is historic and hugely beneficial for these beneficiaries of BDA and OSHB.

Speaking on the occasion, BDA Vice-Chairman Shri Sanjay Kumar Singh said BDA has taken several citizen friendly steps recently, including making almost all its services available online for the benefit of the people in the age of Information Technology.

“As per the direction of our Hon’ble Chief Minister, we have organized a special programme today to hand over lease deed or title of properties to several beneficiaries in six different housing schemes. In addition to this, BDA is expeditiously working on to execute all the pending lease deeds and hand over to the respective beneficiaries.”

Laying emphasis on the role of BDA in providing affordable housing to the eligible beneficiaries, the Vice-Chairman said the authority has been working on several new projects and soon 1000 new housing units will be ready for which allotment may start from January end. The BDA is also constructing around 7500 housing units under Affordable Housing project.

The six housing projects of BDA in which the allottees were distributed lease deed are as below mentioned:

The five housing schemes of OSHB under which the lease deed was distributed to allottees are as follows: