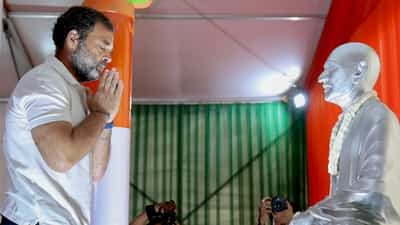 New Delhi: Congress MP Rahul Gandhi on Sunday paid tributes to Mahatma Gandhi on his 153rd birth anniversary and said while it is convenient for those in power to appropriate the legacy of the “Father of the Nation”, it is difficult to walk in his footsteps.

Rahul Gandhi also said amid the politics of violence and lies, the Congress’s ongoing ‘Bharat Jodo Yatra’ will spread a message of “ahimsa and ‘swaraj”.

Rahul Gandhi visited a Khadi Gramodyaga Kendra in Karnataka’s Badanavalu where Mahatma Gandhi had visited in 1927.

“We remember and pay our respects to that great son of India. Our remembering is made more poignant by the fact that we are on the 25th day of the Bharat Jodo Yatra, a padyatra in which we are walking his path of ahimsa, unity, equality and justice,” the former Congress leader said in a statement.

“Just as Gandhiji fought the Brjodiitish Raj, we … (have) embarked on a battle with the very ideology that killed Gandhi. This ideology has delivered inequality, divisiveness and the erosion of our hard-won freedoms in the past eight years. Against this politics of himsa (violence) and ‘asatya’ (lies), the Bharat Jodo Yatra will spread the message of Ahimsa and Swaraj from Kanyakumari to Kashmir,” he added.

Just as Gandhiji fought the British Raj, we are today embarked on a battle with the very ideology that killed Gandhi.

Earlier in the day, Rahul Gandhi offered a floral tribute to the Gandhi statue at Khadi Gramodyog followed by a prayer meeting.