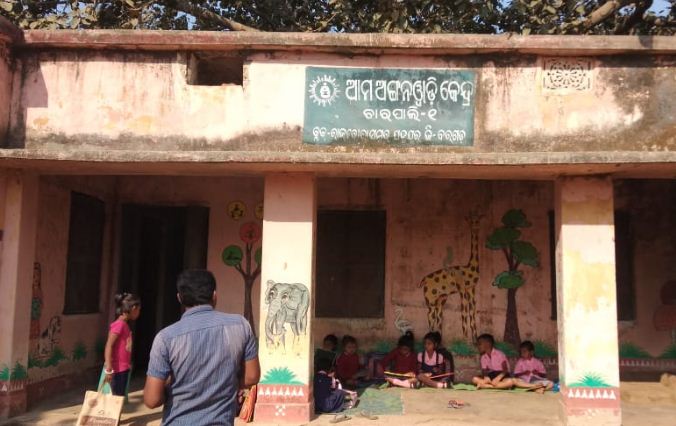 Bargarh: Poor infrastructural status of an Anganwadi centre at Gurapalli under Padmapur block in Bargarh district has forces students to study in open.

According to reports, the ceiling of the classrooms here are falling apart making the iron rods visible used during construction visible.

Gaping holes can also be spotted on the ceiling in many places and the structure looks like it may collapse anytime. The scene is no different on the floor as well.

Pointing to the absence of safe space, the parents of the student refused to send their children to school. Almost two years passed but no sincere steps have been taken for the betterment of the building.

As per reports, Administration has sanctioned Rs 1.5 lakhs for the renovation work of the Anganwadi centre. However, rural committee members refused to renovate the centre stating the repair work are of no use to the damaged building.

Though the grievances have been repeatedly posted on various social media platforms, adequate measures are yet to be taken to resolve the issue, sources said.

Following this, ward members of the village have urged the administration to establish a new building here.

Easy Nail Care Tips And Tricks To Try At Home