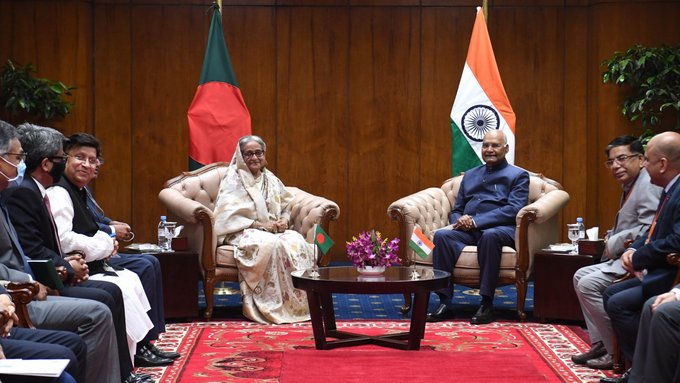 Dhaka: Bangladesh accorded a red carpet welcome to President Ram Nath Kovind upon his arrival in Dhaka on a maiden three-day State Visit during which he will hold talks with his counterpart and attend the golden jubilee celebrations of Bangladesh’s 1971 liberation from Pakistan.

Kovind assured the top Bangladesh leadership that the nation had a “special place” in India’s ‘Neighbourhood First’ policy and underlined that the bilateral relationship based on sovereignty, equality, trust and understanding was mature enough to handle the “most complex of problems”.

The Prime Minister will participate in the homage and reception ceremony of ‘Swarnim Vijay Mashaal’, which he had lit on the same day last year from the ‘eternal flame’ at the National War Memorial here.

As part of the ‘Swarnim Vijay Varsh Celebrations’, PM Modi had also lit four flames that were carried in different directions across the length and breadth of the country, including Siachen, Kanyakumari, Andaman & Nicobar Islands, Longewala, Rann of Kutch and Agartala.

The flames were taken to key battle areas and also to the houses of gallantry award winners and veterans of the 1971 war. At the homage ceremony tomorrow, these four flames will be merged by the Prime Minister with the ‘eternal flame’.

Various events were organised by the Indian Army at several locations in West Bengal and North-East states throughout the year and now a ‘Swarnim Vijay Gatha’ is being organised at Victoria Memorial, Kolkata, which would also mark the culmination of the ‘Swarnim Vijay Varsh’ celebrations. ‘Swarnim Vijay Gatha’ will showcase a variety of events to include a customised light and sound show on the walls of Victoria Memorial, depicting the story of the Bangladesh Liberation War.

President Kovind held talks with Bangladesh PM Sheikh Hasina in Dhaka on “issues of shared interest and reviewed progress relating to the bilateral cooperation between the two nations”, said the Ministry of External Affairs (MEA).

The President and Bangladesh PM also recalled the spirit of the 1971 Liberation War and expressed satisfaction at the joint celebrations of Maitri Diwas, said MEA.