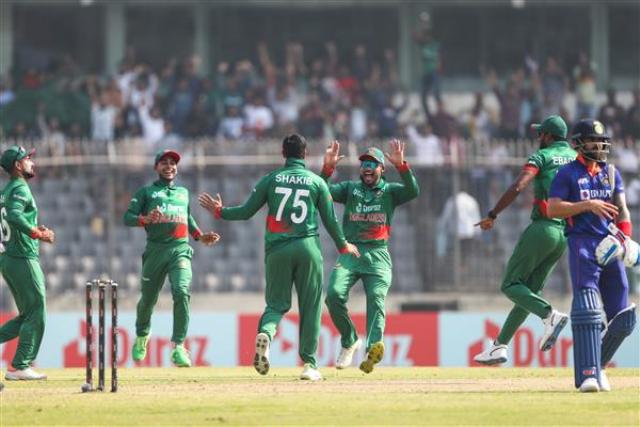 Mirpur: Bangladesh beat India by one wicket in the first ODI with 24 balls to spare here on Sunday.

Earlier, KL Rahul was an aberration in a disastrous batting display that saw India getting bowled out for 186 against a Bangladesh attack led admirably by Shakib Al Hasan (5/36).

Rahul struck a fluent 73 off 70 balls on a day when the others struggled to get going and when the side was packed with all-rounders. Rahul hit five fours and four sixes.

Opting to field, Mustafizur Rahman started the proceedings with a maiden, before India skipper Rohit Sharma opened the visitors’ boundary count by smashing Hasan Mahmud through the gap between point and cover.

Shikhar Dhawan went down the ground and got his first boundary by sending the ball over cover.

Bangladesh skipper Litton Das effected an early bowling change, bringing in off-spinner Mehidy Hasan Miraz into the attack in the fourth over, and he started on a tidy note before castling Dhawan for seven.

The opener went for the reverse sweep but the ball bounced a bit more than usual, touched his wrist before going on to hit the stumps.

Rohit struck the first six of the series when he pulled Mahmud over deep square leg after the medium pacer drifted the ball on his pads.

The India skipper again found the deep square leg region but this time for a boundary as he employed the sweep shot against Miraz.

Rohit then chose the off-side, cutting Mahmud along the ground for a boundary after being given plenty of width.

It was then the turn of Virat Kohli to pick the deep square leg region as the former captain swept Miraz for a four.

Litton made another bowling change, summoning the seasoned Shakib, and again he was instantly rewarded thanks to a brilliant delivery by the star all-rounder.

Having got a start, Rohit (27 off 31 balls) went for the turn but the ball didn’t, and instead, went past the inside edge before disturbing the middle and leg stumps.