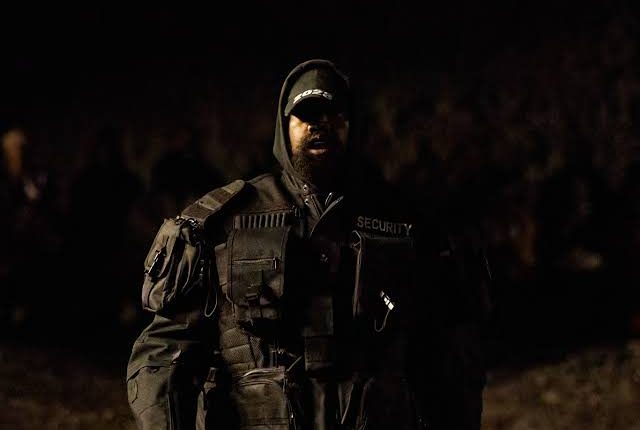 The show was set in a mud grave

On the seat of every chair in the gigantic Parc des Exposition de Villepinte where the epic Balenciaga show took place was a note from Demna: “This show is a metaphor for digging for truth and being down to earth.” Before you got to your seat, you had to tip-toe your way around the blackened-out space not to fall into the enormous mud grave that had been dug in the centre of the show space, earthy aroma in tow. Preceded by a longer text mapping out Demna’s aversion for the way fashion labels people, his metaphor for The Mud Show was admirable. But after last season’s presentation – staged just a week after Putin invaded Ukraine – which saw models fighting their way through a snowstorm with bin bags in their hands as a reflection of Demna’s own flight from Russian separatists in Abkhazia in the early 1990s, it was hard not to carry on the association. Just two weeks ago, the Ukrainian military discovered a mass grave in Izium recently dug by the Russian troops, which looked a lot like it. It made for an unnerving start to a Balenciaga show that once again burst the escapist bubble of fashion week. And thank god for that.

“Naturally I’m an optimist, but I can’t be optimistic right now. This show expressed that very much: The music, the set… It really spoke about the moment we live in,” Demna said, adding that he’s perhaps more “hopeful”. Walking to a loud techno soundtrack that sounded like a post-apocalyptic funeral march (after the Queen’s death, we’re all familiar with a funeral march), Kanye West opened the show trudging through the mud in a square, oversized multi-pocket combat jacket and leather biker trousers. (His ex-wife Kim Kardashian and their children looked on runway-side with Khloe Kardashian and Kylie Jenner.) The look only underlined the grave associations, but also reflected the new set of realities we’re witnessing eight months into the war Demna first referenced days after its inception: Russian reserves forced to go to battle, military losses in the thousands and civilians living in war zones. This wasn’t something Demna put into words, but like last season, the show felt like a form of release to him. If war references seem weird in a fashion context, it’s different when it’s Demna. He has lived the reality currently unfolding in the Eastern Ukraine regions.

It rebelled against society’s ideas of right and wrong

As the show progressed, the war associations faded along with the combat elements. It evolved into a study of the identities and uniforms around which Demna’s work has always centred. An anthropologist designer, he is interested in the normative dress codes that signify communities and the characters they breed. One of his closest friends, the model Yuri walked the show in a denim suit with the jacket off revealing the scars of chest surgery. Another model had the mohawk of a classic punk. And throughout, Demna enhanced his cast’s faces with prosthetics that made them look entirely unique. The point was this: “I hate boxes and labels. That’s how I’ve felt all my life, and I feel like I’ve been punched in the face for being who I am. That’s what society and the internet does. They make up boxes. You have to continue walking and standing up for who you are and defending that,” he said. It inspired a collection that celebrated manmade ideas of the incorrect and disproportionate: Belts and the elastic bands of logo underwear were over-dimensional to the trousers they were styled on, some clothes looked like rags and most of the collection was covered in mud – either from the runway, or through the effect of surface decoration.

Clothes were covered in mud as a form of adornment

Backstage, Demna was wearing a sweatshirt with very real-looking mud-splatter adornment. “What is luxury? I’ve been dealing with that since I started. Is it like a cashmere turtleneck, or can it be anything? In my opinion, it can. That’s what I’ve been trying to say for almost ten years now. Putting that in mud was a reference to that. It’s blasphemous to put a 1,000-euro shoe in mud, but that makes it real. Otherwise it’s just a dream we aspire towards,” he argued. “Making something dirty is much more difficult [than making it neat]. We have a whole department now that ages and makes things dirty. It’s the opposite of what luxury is supposed to be, but I don’t happen to agree with that.” In that sense, the collection was anti-establishment on a level that questioned and confronted convictions we grow up with, passed down by generations and engrained from birth as a matter of course. “It’s about people making their judgments when they see things. It was about addressing your own state of mind and how you feel,” Demna said. “I’m a bit worried that I’m abusing my job as therapy, but it is actually a very good way of finding yourself through what you do,” he laughed.

It featured men with baby carriers and fake babies

“The whole show was how I would like to see people dress,” Demna said. What he meant wasn’t that he wanted to apply his own aesthetic to the world he sees on the street, but that everyone – from the kid in the tracksuit to the lady in the ballgown – should liberate themselves from the rules society drags down over our heads, psychologically coercing us to dress ‘appropriately’. With trademark wit, he illustrated it in men with baby carriers holding what looked like real babies. (You could practically sense the Kardashian-Jenners reaching out for one.) “They were not real babies, but they were very realistic. Quite creepy, I have to say. We had a hard time styling those,” Demna laughed, before explaining the intention behind the sentiment he wanted to convey: “I wanted this ‘dad person’ that has piercings and wears ballerinas and crazy clothes.” At the root of Demna’s work at Balenciaga is a hellbent desire to bring the things we suppress to the surface. “For me, it’s a follow-up to the snow show. What happens when the show melts? It obviously turns into mud, but I found that the reference went deeper than that. It was digging for truth, which is something I’m constantly doing in my work: Trying to find out why I’m a designer through my personal experiences,” he said. “This was a very ‘me’ show in terms of references and looks and silhouettes.”