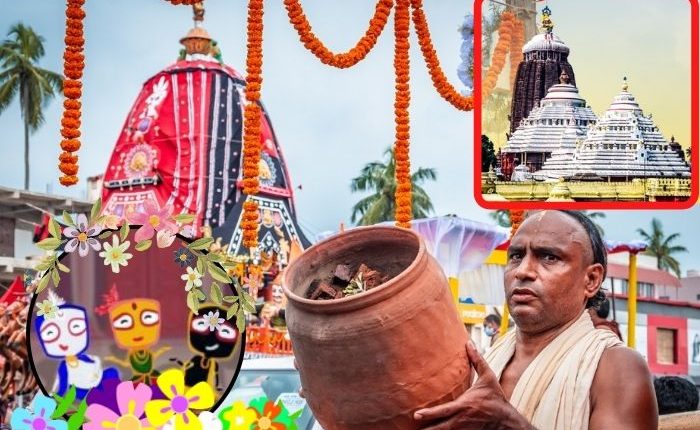 Puri: After completing the nine-day long sojourn, the three chariots of the Holy Trinity have reached Singhadwara, the lion’s gate of Srimandir in Puri this evening on the occasion of Bahuda Yatra.

In the wake of the COVID-19 pandemic, curfew has been imposed in the Pilgrim Town. Hence unlike other years, this time Bahuda Yatra of the deities was observed without devotees.

After the daily rituals at the Gundicha temple early in the morning today the three deities boarded their respective chariots. They were taken to the chariots through pahandi by the servitors.

However, before the commencement of the Bahuda Yatra or Trinity’s return to Jagannath temple, their chariots halt at several places along the way.

Lord Jagannath’s chariot known as the Nandighosh, first halts at the cemetery of his Muslim devotee Salabega.  At his second stop, burnt rice puddings (Poda Pitha) prepared by his aunt are offered to the Lord.

The chariots then proceed on the Grand Road connecting Jagannath temple and the Gundicha temple.

Another important ritual that is a part of the Bahuda Yatra is the ‘Lakshmi Narayan Bheta’ wherein, Lord Jagannath (Narayana) meets his consort Goddess Lakshmi at king Gajapati’s Palace.

Lord Jagannath awaits Goddess Lakshmi’s arrival at the Shreenahara and proceeds on his journey after the meeting.

As the Bahuda Yatra heads towards its culmination, the chariots are welcomed at Lion’s gate or the Singhadwara of Puri temple. Thereafter, the ritual of Goti Pahandi is carried out, thus concluding the Rath Yatra.