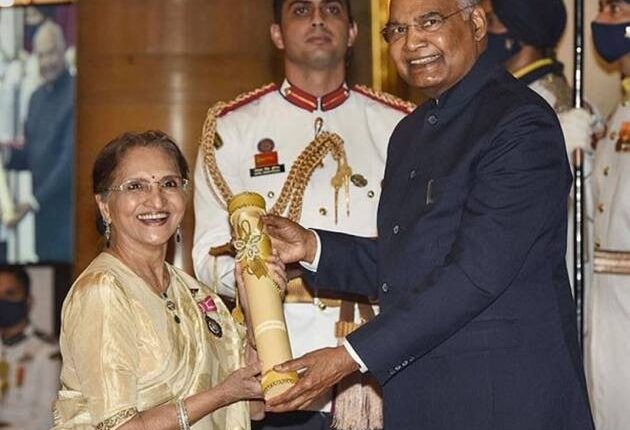 New Delhi: Veteran television and film actress Sarita Joshi was honoured with the prestigious Padma Shri Award on Monday for her contribution in the field of arts at a ceremony held at the Rashtrapati Bhavan in New Delhi.

The actress is remembered for her role as Godavari Labhshankar Thakkar a.k.a. Baa in the Star Plus hit dramedy Baa Bahoo Aur Baby, for which she won many awards.

Joshi has performed in about 15,000 shows in Gujarati, Marathi, Hindi and Marwari for six decades.

Actor-filmmaker Kangana Ranaut, veteran television and film actor Sarita Joshi and music composer Adnan Sami were among 61 Padma Shri awardees for the year 2020 who received the country’s fourth highest civilian honour on Monday at a ceremony held in the Rashtrapati Bhavan here.

President Ram Nath Kovind presented Padma awards to 73 individuals, some posthumously. Of these, four were Padma Vibhushan, eight Padma Bhushan and 61 Padma Shri awards for the year 2020, according to a statement issued by the President’s office.

Kirron Kher Returns As Judge On India’s Got Talent

Low Pressure Forms Over BoB, Likely To Concentrate Into Depression In Next 36-hr