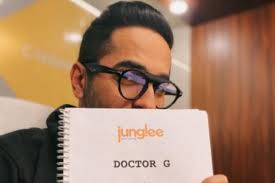 Ayushmann Khurrana To Star In Anubhuti Kashyap’s Next ‘Doctor G’

Mumbai: Actor Ayushmann Khurrana is all set to play a doctor in Anubhuti Kashyap’s first film, Doctor G.  The actor took to his Instagram and also shared a photo with the script.

He wrote, “Opening soon for consultation #DoctorG” The film will be directed by Anubhuti Kashyap and produced by Junglee Pictures.

Doctor G, which marks Ayushmann Khurrana’s third collaboration with Junglee Pictures, after Badhaai Ho and Bareily Ki Barfi, is said to be a campus comedy.

The film is written by Sumit Saxena, Vishal Wagh and Saurabh Bharat.