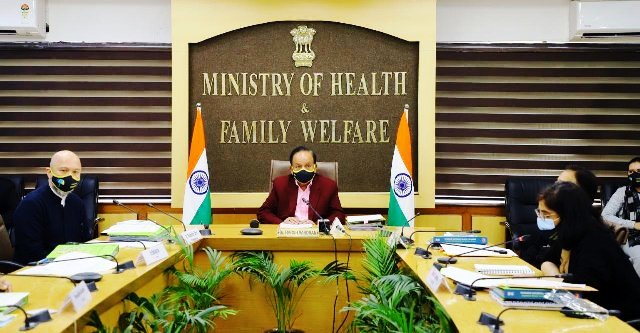 Chairing an event to mark Universal Health Coverage Day Dr Harsh Vardhan, Union Minister of Health and Family Welfare, said on Saturday that COVID19 has greatly magnified the need for building resilient health care systems and ensuring their indiscriminate, equitable access to all.

Dr Harsh Vardhan noted that through the two wings of Ayushman Bharat, the Health and Wellness Centres (HWCs) and the Pradhan Mantri Jan Aarogya Yojana (PMJAY), the government has been making quality healthcare affordable and accessible for crores of people in the country.

The Union Minister said : “We have made remarkable progress in operationalizing Ayushman Bharat – Health and Wellness Centers and crossed a major landmark in our journey. With 51,500 centers now functional, more than 1/3 of the target has been met. This has led to improved access to affordable primary healthcare services for more than 25 crore people.”

Over 6.89 crore people were screened for Hypertension and more than 5.62 crore people screened for diabetes through the HWCs, the Minister said and added that the HWCs have also conducted over 35 lakh wellness sessions involving activities such as Yoga, Zumba, Shirodhara and Meditation.

Dr Harsh Vardhan said over 1.45 crore cashless treatments were provided to the poorest citizens under AB-PMJAY and recognized the programme as a huge source of support and security for millions of families reeling under the extreme stress of serious illness.

He saluted the primary health care workers who have been at the forefront of the battle against COVID19 for rising to this unprecedented challenge and for continuing to serve the society selflessly.

He virtually felicitated 1153 primary healthcare workers who have been nominated by the state for their exemplary service.

The Phase II covering the remaining 12 States and 2 UTs had their fieldwork suspended due to COVID-19, which has been resumed from November and is expected to be completed by May, 2021.

Substantial improvement in maternal and child health indicators over NFHS-4 (2015-16) was recorded in the present survey. The fertility rate has further declined, contraceptive use has increased and unmet need has been reduced in most Phase I states.