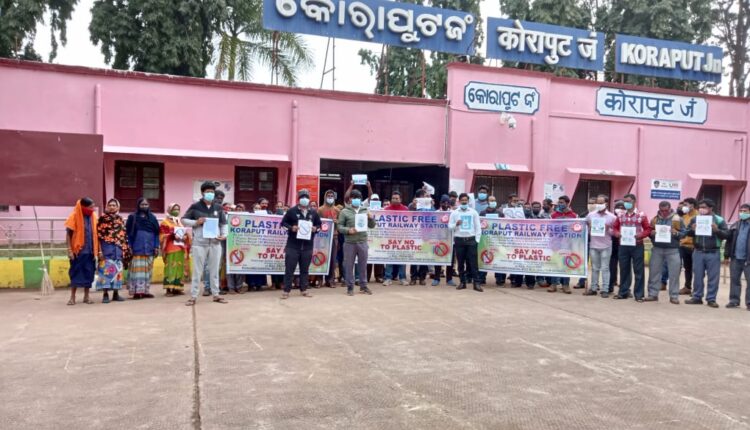 Koraput: Despite a ban on the use of single-use plastic bags, there has been extensive use of the banned plastic in markets, and other places, breaching the rules and thereby increasing the generation of plastic waste here.

In this connection, Waltair Division is conducting awareness drives- on saying ‘no’ to plastic bags and encouraging use of cloth at the railway stations or in railway premises.

To create awareness, the Environment & Housekeeping Management wing of the Mechanical Department organised rally in a symbolic way to send a message to the public on their responsibility in joining the fight against plastic and using cloth and other eco-friendly bags instead of depending on plastic bags. To begin, an awareness rally was organised at Koraput station and in Railway localities. Such campaigns will also be conducted at various railway stations, colonies etc.

Divisional Railway Manager Anup Satpathy called upon the public to switch over to alternatives to plastic and discard all kinds of plastic bags. “Try to make it a habit to carry cloth bags to the markets. This will largely help in addressing the plastic menace and the dangers of using plastic can be effectively addressed. We need a voluntary resolution by ourselves to avoid plastic and join hands in the campaign.”

To ensure an effective ban, focusing a behavioural change, more such campaigns will be conducted over the Division.

Third Dose Of Astrazeneca Vaccine Is Effective Against Omicron: Study