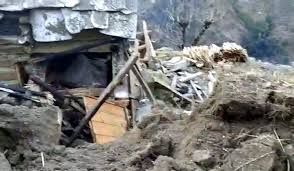 The flooding has destroyed many riverside houses. The ITBP personnel have rushed to rescue people due to sudden gushing of water from Dhauliganga river.

Chamoli district magistrate has directed officials to evacuate people living near the banks of Dhauliganga river. The district magistrate and the superintendent of police are present on the spot to oversee the relief and rescue operation in the area.

Rawat advised the people not to pay any heed to rumours and added that his government is taking all necessary steps to mitigate the situation.