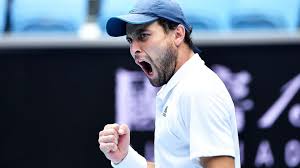 Melbourne: Aslan Karatsev became the first man in the professional era to reach the semifinals in his Grand Slam debut.

The 114th-ranked qualifier from Russia outclassed Grigor Dimitrov with 2-6, 6-4, 6-1, 6-2 scoreline at the Australian Open earlier in the day. He will next face either top seed Novak Djokovic or sixth seed Alexander Zverev.

Dimitrov, the No 18 seed, appeared to have the match under control after the first set but suffered back spasms beginning late in the second set.

The pain and stiffness worsened in the third set, and he appeared to be on the edge of retiring for the rest of the match, but returned to the court for the fourth set after receiving medical treatment.

The 27-year-old Karatsev won the match to set up a last-four clash with top seed Novak Djokovic or sixth seed Alexander Zverev.

In making the last four, Karatsev became just the second qualifier to do so at the Australian Open after Bob Giltinan in 1977. He was also the lowest-ranked man, at 114, to make the semis at a Slam since Goran Ivanisevic at Wimbledon in 2001 when ranked 125.