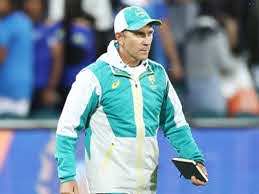 Melbourne: With a mounting injury toll, Australia may rope Test players into duty for the day-night tour match against the Indian team, said coach Justin Langer.

While addressing about the challenges of playing the sport amid an alarming injury toll ahead of the four-Test series, Justin Langer said Australia had planned to send most of the squad to Adelaide to prepare for the series-opening day-night Test starting Dec. 17 but may instead include more players in this week’s three-day pink-ball warm-up against India in Sydney.

Limited overs captain Aaron Finch was ruled out of the second T20 match with a glute problem, while paceman Mitchell Starc was excused from the final two T20 games for personal reasons.

All-rounder Marcus Stoinis was recalled for Sunday’s match after battling a side strain but did not bowl.