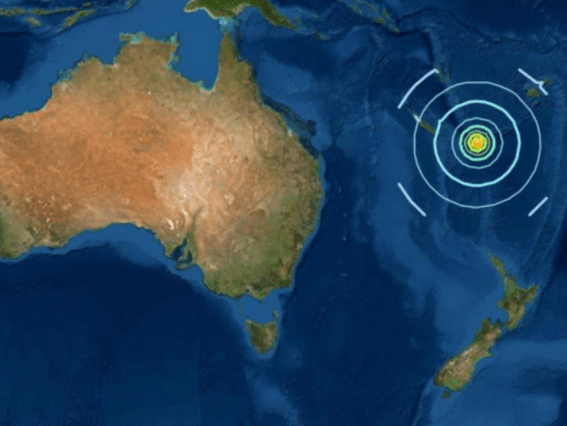 New Delhi: After a earthquake of 7.7 magnitude hit the South Pacific on Thursday which sparked a tsunami warning by the US Geological Survey, the Australian Bureau of Meteorology confirmed that it has generated a tsunami.

But a few hours later, the meteorological department has called off the warning which was mainly targeted towards New Zealand, New Caledonia, Vanuatu and other locations in the region.

The quake struck at just after midnight on Thursday local time (1320 GMT Wednesday) about 415 kilometres (258 miles) east of Vao in New Caledonia at a depth of 10 kilometres, according to the US Geological Survey.

It said waves reaching between 0.3 and one metre above the tide level were possible for Fiji, New Zealand and Vanuatu.

A wave of 0.3 metres struck Fiji, according to the Twitter feed of the island nation’s seismology department.

The Australian Bureau of Meteorology confirmed in a tweet that a tsunami had been generated.

The bureau warned of a threat to Lord Howe Island, which is about 550 kilometres (340 miles) east of Australia’s mainland, but said there was no need for evacuations.

Locals in the Vanuatu capital Port Vila said they felt the quake but there was no damage from either the shake or subsequent waves.

The New Zealand National Emergency Management Agency warned of “strong and unusual currents” in northern coastal areas but said there was no tsunami risk.

There were no initial reports of casualties or damage from the tsunami or the quake, which was initially recorded by USGS at magnitude 7.5 before being revised to 7.7.

ISL: Jamshedpur playoff hopes afloat as Chennaiyin shoot themselves in the foot