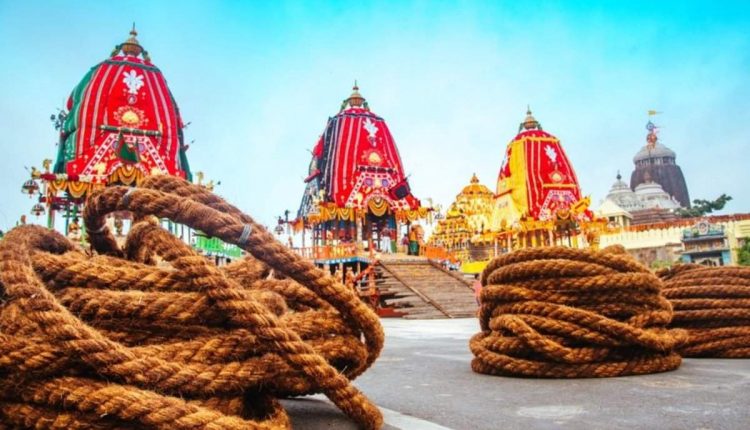 Puri: Rath Yatra at Puri is being held on Monday after the Supreme Court modified its stay order and permitted the festivities without any public attendance, besides directing other precautions in view of the coronavirus pandemic.

In the Hindu month of Aashadha, the Yatra generally begins on the Dwitiya Tithi (second day), Shukla Paksha (waxing phase of the Moon). According to the Gregorian calendar, the event is presently held in June or July.

The literal meaning of Jagannath is Lord of Universe. In Puri, in the state of Odisha the Jagannath Temple is one of the four Dhams of hindus. Here Lord Jagannath is worshipped with His sister Devi Subhadra and brother Balabhadra. Rath Yatra is also known as Gundicha Yatra, Ghosa yatra, Navdivisiya Yatra, Patit Pawan Yatra etc. Rath Yatra is of immense significance.

Three heavily-built wooden chariots of Lord Jagannath, Lord Balabhadra and Devi Subhadra are traditionally pulled by thousands of devotees over a distance of three kilometres twice during the nine-day festival of the Trinity at Puri.

Lord Jagannath’s Rath, Nandighosha (also known as Garudadhwaja, Kapiladhwaja) is about 44 feet tall and has 16 wheels. Balbhadra’s chariot is called Taladhwaja or Langaladhwaja, and it stands 43 feet in height and has 14 wheels. While Subhadra’s chariot has 12 wheels and it is 42 feet tall.